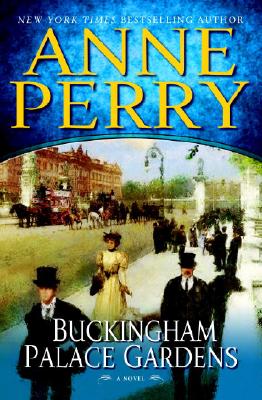 Anne Perry’s Charlotte and Thomas Pitt mysteries are perhaps the best loved of all her Victorian bestsellers, luring us into the multilayered richness of London, from the great mansions and secluded drawing rooms to the city’s festering slums. Now, in her most mesmerizing novel yet, she invites us to a house-party at Buckingham Palace.

The Prince of Wales has asked four wealthy entrepreneurs and their wives to the palace to discuss a fantastic idea: the construction of a six-thousand-mile railroad that would stretch the full length of Africa. But, alas, the prince’s gathering proves disastrous when the mutilated body of a prostitute hired for a late-night frolic (after the wives have retired to bed) turns up among the queen’s monogrammed sheets in a palace linen closet.

With great haste, Thomas Pitt, brilliant mainstay of Special Services, is summoned to resolve the crisis. The Pitts’ cockney maid, Gracie, is also recruited–to pose as a palace servant and listen in on the guests’ conversations, scan their bedrooms, and scrutinize their troubled faces for clues to hidden rivalries and attachments that could have lead to murder. If Pitt and Gracie fail to find out who brutally murdered the young woman–as seems increasingly likely–Pitt’s career will be over, and the scandal may just cause the monarchy to fall.

With a cast of wonderful characters, among them the gentle Princess of Wales, and a twisting plot that takes us into the hidden world of the royal family, Anne Perry probes deeply the hearts of men and women ensnared by their own emotions. Never has this distinguished novelist told a story with more truth and passion.

Praise for Anne Perry and her Charlotte and Thomas Pitt novels

“Anne Perry has once again delivered the tasty concoction her readers have come to expect . . . and presents us with moral and political puzzles that are all too close to our own.”
–Los Angeles Times Book Review

“Terrific, vivid stuff . . . The alarmingly prolific Anne Perry [is] a master of the genre.”
–The Seattle Times

“Perry’s as good as it gets. . . . The final courtroom scene produces more victims and left me breathless.”
–The Providence Journal