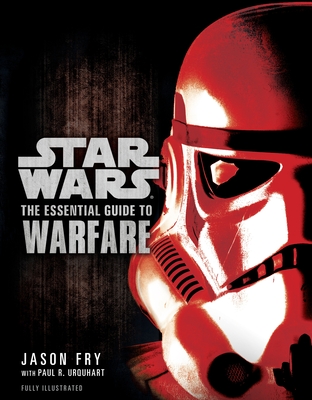 The Essential Guide to Warfare

THE DEFINITIVE GUIDE TO THE ULTIMATE INTERGALACTIC BATTLEFIELD

Like many a great epic, Star Wars is rooted in a rich history of armed conflict. Now, for the first time, the facts, figures, and fascinating backstories of major clashes and combatants in the vast Star Wars universe have been documented in one fully illustrated volume. Extensively researched and inventively written, Star Wars: The Essential Guide to Warfare combines action-filled narrative with encyclopedic knowledge that:

Encompassing all of the Star Wars media, including the legendary films, the hit TV series Star Wars: The Clone Wars, the bestselling books, comics, and videogames, and packed with original full-color artwork, Star Wars: The Essential Guide to Warfare is a conquering achievement.

Jason Fry is a writer in Brooklyn, New York, where he lives with his wife, son, and about a metric ton of Star Wars stuff.

Paul R. Urquhart is a pseudonym. He was born in Scotland between Star Wars: A New Hope and Star Wars: The Empire Strikes Back and has been a Star Wars fan since he bought his first toy X-wing at the age of three. Although occasionally mistaken for a larger-than-life Ewok, he is in fact a historian, specializing in medieval society.
Loading...
or support indie stores by buying on
(This book is on backorder)