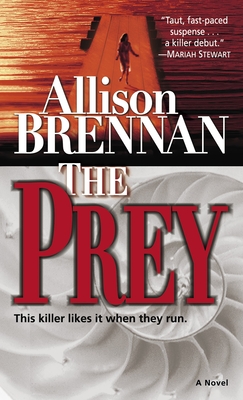 First, she imagined it. Then a killer made it real.

Rowan Smith is living in a borrowed Malibu beach house while her bestselling novel is made into a Hollywood movie. A former FBI agent with a haunted past, Rowan thinks she has outrun her demons. But fiction and reality collide when a dismembered body is found in Colorado: the real-life victim had the same name, occupation, and looks as a character in Rowan’s novel. By the time the FBI, the LAPD, and her own private bodyguard gather around her, another person is killed–again, the murder ripped from the pages of Rowan’s book.

In the company of a former Delta Force officer with secrets of his own, Rowan faces an excruciating dilemma: the only way to chase down the tormenting killer is by revisiting the darkness of her past–and by praying for some way out again.

After the prey is chosen, the hunt is on and the kill is certain.

Allison Brennan is the author of ten bestselling romantic thrillers, including The Prey, Speak No Evil, Killing Fear, and Playing Dead. For thirteen years she worked as a consultant in the California State Legislature before leaving to devote herself fully to her family and writing. She is a member of Romance Writers of America, Mystery Writers of America, and International Thriller Writers. She lives in Northern California with her husband, Dan, and their five children.
or support indie stores by buying on
Copyright © 2020 American Booksellers Association