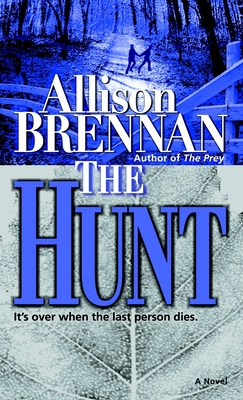 Touched by a killer, she feels the fire of revenge.

Twelve years ago, Miranda Moore miraculously survived the torture of a serial killer who was never caught. Since then, Miranda, a former FBI trainee and now a member of a local search-and-rescue squad, has witnessed with horror the recovery of the mutilated bodies of seven young women, all victims of her tormentor, known as The Butcher. When another beautiful Montana college student goes missing, the Feds get involved, and an agent, a man Miranda once trusted with her heart, arrives to take over the investigation–forcing her toward a painful choice.

Now, while Miranda battles her demons, while friends, lovers, and traitors are caught up in a frantic race against time, a killer hides in plain sight–waiting to finish the one hunt he has left undone.

After the hunt, go in for the kill.

Allison Brennan is the author of ten bestselling romantic thrillers, including The Prey, Speak No Evil, Killing Fear, and Playing Dead. For thirteen years she worked as a consultant in the California State Legislature before leaving to devote herself fully to her family and writing. She is a member of Romance Writers of America, Mystery Writers of America, and International Thriller Writers. She lives in Northern California with her husband, Dan, and their five children.
or
Buy Here
Copyright © 2020 American Booksellers Association