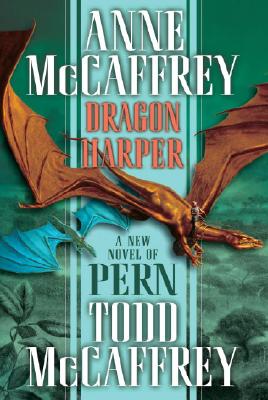 For millions of readers the world over, the name Pern is magical, conjuring up grand vistas of a distant planet whose blue skies are patrolled by brave dragons and their noble riders, a paradise threatened by the periodic fall of deadly Thread. But not all dangers descend from the skies. Now, in their third collaboration, Anne McCaffrey and her son, Todd McCaffrey, spin a tale of a mysterious illness that may succeed in doing what centuries of Threadfall could not: kill every last human on Pern.

Life in the Harper Hall is busy for best friends Kindan, Nonala, and Kelsa. As the only female apprentices, Nonala and Kelsa are the butt of jokes and easy targets for the bully Vaxoram and his cronies. But when Kindan springs to Kelsa’s defense, he winds up in a fight for his life against the older, bigger Vaxoram–a fight that will lead to a surprising friendship.

Meanwhile, in nearby Fort Hold, a clutch of fire-lizard eggs is about to hatch, and Lord Bemin’s beautiful young daughter, Koriana, is determined to Impress one of the delightful creatures. At the hatching, Kindan Impresses a fire-lizard of his own . . . and wins the heart of Koriana. But Lord Bemin mistrusts harpers and will not hear of a match between his daughter and the low-born Kindan.

Then fate intervenes in the form of a virulent plague as fast-spreading as it is deadly. Arising suddenly, as if out of nowhere, the contagion decimates hold after hold, paying no heed to distinctions of birth. In this feverish crucible, friendship and love will be tested to the breaking point and beyond. For with Threadfall scant years away, the Dragonriders dare not expose themselves to infection, and it will fall to Kindan and his fellow apprentices to bravely search for a cure and save humanity.

The price of failure is unthinkable. But the price of success may be even harder to bear.

“Grittier than the early parts of the series; Todd’s apparently brought a wider, more current worldview to Pern.”
–The San Diego Union-Tribune

“A guaranteed pleaser [in] one of SF’s most splendid and longest-lived sagas.”
–Booklist