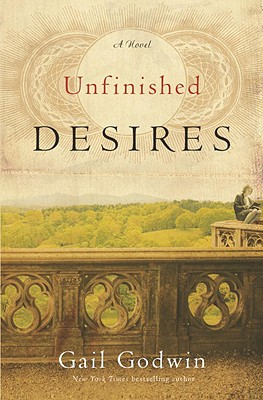 “Gail Godwin's many-voiced novel is a study of women, their betrayals and slyness, and their compassion and friendships. Moving in time but focused on 1951, Unfinished Desires takes us to a tony Catholic school for girls in the mountains of North Carolina. There shifting alliances, old hurts, adolescent angst, and adult interference create consequences no one escapes. Godwin's ironic voice never allows for the ease of black and white judgments.”
— Helen Sinoradzki, Annie Bloom's Books, Portland, OR
View the List

It is the fall of 1951 at Mount St. Gabriel’s, an all-girls school tucked away in the mountains of North Carolina. Tildy Stratton, the undisputed queen bee of her class, befriends Chloe Starnes, a new student recently orphaned by the untimely and mysterious death of her mother. Their friendship fills a void for both girls but also sets in motion a chain of events that will profoundly affect the course of many lives, including the girls’ young teacher and the school’s matriarch, Mother Suzanne Ravenel.

Fifty years on, the headmistress relives one pivotal night, trying to reconcile past and present, reaching back even further to her own senior year at the school, where the roots of a tragedy are buried.

In Unfinished Desires, a beloved author delivers a gorgeous new novel in which thwarted desires are passed on for generations–and captures the rare moment when a soul breaks free.

"A large, roomy story of love, loss, fidelity, secrets, rivalry and faith in the lives of a charming, flawed troupe of characters…. Provocative and rewarding."—Boston Globe

"This rich world…draws and holds the reader from the first to the final pages of the work. " —Denver Post

"Godwin’s reserved yet powerful new novel is set in a boarding school in the mountains of North Carolina…Though it’s a beautiful well-intentioned institution, the school is anything but serene…."—New York Times Book Review

"If you plan on reading just one great novel in 2010, this might be it… a big old-fashioned book about jealousy and passion at a Catholic girl’s school, written with Gail Godwin’s trademark depth and humor…."—Bookpage

“A strong story populated by a host of memorable characters–smart, satisfying fiction, one of the author’s best in years.”—Kirkus Reviews starred review,

"If you plan on reading just one great novel in 2010, this might be it. Unfinished Desires is a big old-fashioned book about jealousy and passion at a Catholic girl’s school, written with best-selling author Gail Godwin’s trademark depth and humor … Godwin’s 13th novel is filled with penetrating observations on women’s friendships, family and faith … The wise, human story she tells reaches beyond the boundaries of region and religion, satisfying any reader looking for a good story."—Bookpage

"What better setting for exploring female bonds than a Southern Catholic girls’ school where epic feuds and forgiveness pass through generations? Godwin’s take is smart and intriguing." —Good Housekeeping

Gail Godwin is a three-time National Book Award finalist and the bestselling author of twelve critically acclaimed novels, including A Mother and Two Daughters, Violet Clay, Father Melancholy's Daughter, Evensong, The Good Husband, and Evenings at Five. She is also the author of The Making of a Writer: Journals, 1961-1963, the first of two volumes, edited by Rob Neufeld. She has received a Guggenheim Fellowship, National Endowment for the Arts grants for both fiction and libretto writing, and the Award in Literature from the American Academy of Arts and Letters. She has written libretti for ten musical works with the composer Robert Starer. She lives in Woodstock, New York.
Loading...
or
Not Currently Available for Direct Purchase