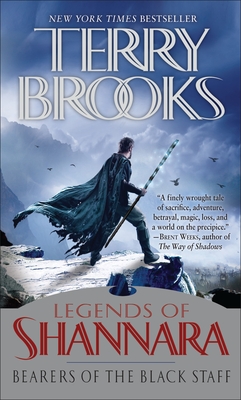 Bearers of the Black Staff

Five hundred years have passed since the devastating demon-led war tore apart the United States and nearly exterminated humankind. Those who escaped the carnage were led to sanctuary in an idyllic valley, its borders warded by powerful magic against the horrors beyond. But the cocoon of protective magic surrounding the valley has now vanished. When Sider Ament, the only surviving descendant of the Knights of the Word, detects unknown predators stalking the valley, he fears the worst. And when expert Trackers find two of their own gruesomely killed, there can be no doubt: The once safe haven has been made vulnerable to whatever still lurks in the outside wasteland. Together, Ament, the two young Trackers, and a daring Elf princess spearhead plans to defend their ancestral home. And in the thick of it all, the last wielder of the black staff and its awesome magic must find a successor to carry on the fight against the cresting new wave of evil.

“A finely wrought tale of sacrifice, adventure, betrayal, magic, loss, and a world on the precipice.”—Brent Weeks, author of The Way of Shadows

“[A] superlative Tolkien-style fantasy tweaked with a contemporary vibe.”—Publishers Weekly

“A story that will delight Brooks’ legions of fans . . . Here’s to many more tales of this incredible world.”—SF Revu