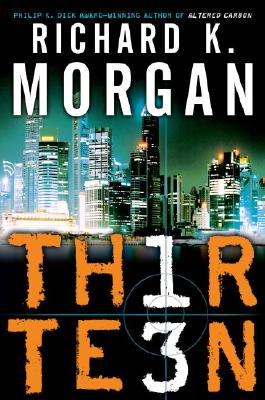 The future isn’t what it used to be since Richard K. Morgan arrived on the scene. He unleashed Takeshi Kovacs–private eye, soldier of fortune, and all-purpose antihero–into the body-swapping, hard-boiled, urban jungle of tomorrow in Altered Carbon, Broken Angels, and Woken Furies, winning the Philip K. Dick Award in the process. In Market Forces, he launched corporate gladiator Chris Faulkner into the brave new business of war-for-profit. Now, in Thirteen, Morgan radically reshapes and recharges science fiction yet again, with a new and unforgettable hero in Carl Marsalis: hybrid, hired gun, and a man without a country . . . or a planet.

Marsalis is one of a new breed. Literally. Genetically engineered by the U.S. government to embody the naked aggression and primal survival skills that centuries of civilization have erased from humankind, Thirteens were intended to be the ultimate military fighting force. The project was scuttled, however, when a fearful public branded the supersoldiers dangerous mutants, dooming the Thirteens to forced exile on Earth’s distant, desolate Mars colony. But Marsalis found a way to slip back–and into a lucrative living as a bounty hunter and hit man before a police sting landed him in prison–a fate worse than Mars, and much more dangerous.

Luckily, his “enhanced” life also seems to be a charmed one. A new chance at freedom beckons, courtesy of the government. All Marsalis has to do is use his superior skills to bring in another fugitive. But this one is no common criminal. He’s another Thirteen–one who’s already shanghaied a space shuttle, butchered its crew, and left a trail of bodies in his wake on a bloody cross-country spree. And like his pursuer, he was bred to fight to the death. Still, there’s no question Marsalis will take the job. Though it will draw him deep into violence, treachery, corruption, and painful confrontation with himself, anything is better than remaining a prisoner. The real question is: can he remain sane–and alive–long enough to succeed?

“Forces is turbo-injected with moral ambiguity, Wag the Dog political scenarios, and action sequences fit for a Bruckheimer movie. [Grade:] A.”
–Entertainment Weekly

“Compelling . . . immensely entertaining . . . full of duplicitous characters, murky motives, and a detective who’s as tough as he looks.”
–The Philadelphia Inquirer

“Gritty and vivid . . . Looks as if we have another interstellar hero on our hands.”
–USA Today