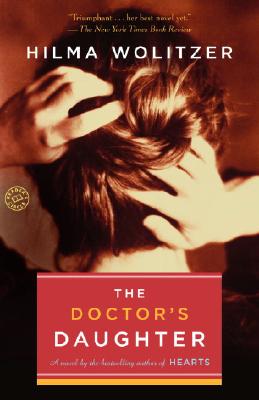 In her first work of fiction in more than a decade, award-winning novelist Hilma Wolitzer brilliantly renders the intimate details of ordinary life and exposes a host of hidden truths. The Doctor’s Daughter is a haunting portrait of a woman coming to terms with her family history and the fallibility of memory.

One morning, Alice Brill awakes with a sudden awareness that something is wrong. There’s a hollowness in her chest, and a sensation of dread that she can’t identify or shake. Was it something she’s done, or forgotten to do? As she scours her mind for the source of her unease, she confronts an array of disturbing possibilities.

First, there is her marriage, a once vibrant relationship that now languishes stasis. Then there’s her idle, misdirected younger son, who always needs bailing out of some difficulty. Or perhaps Alice’s trepidation is caused by the loss of her career as an editor at a large publishing house, and the new path she’s paved for herself as a freelance book doctor. Or it might be the real doctor in her life: her father. Formerly one of New York’s top surgeons, he now rests in a nursing home, his mind gripped by dementia. And the Eden that was Alice’s childhood–the material benefits and reflected glory of being a successful doctor’s daughter, the romance of her parents’ famously perfect marriage–makes her own domestic life seem fatally flawed.

While struggling to find the root of her restlessness, Alice is buoyed by her discovery of a talented new writer, a man who works by day as a machinist in Michigan. Soon their interactions and feelings intensify, and Alice realizes that the mystery she’s been trying to solve lies not in the present, as she had assumed, but in the past–and in the secrets of a marriage that was never as perfect as it appeared.

Like the best works of Anne Tyler, Sue Miller, and Gail Godwin, The Doctor’s Daughter is private yet universal, luminous and revelatory–and marks the reemergence of a singular talent in American writing.

Praise For The Doctor's Daughter: A Novel…

“A wonderfully fluent blend of intelligence, tenderness, and vitality. [The Doctor’s Daughter] fearlessly explores the difficult terrain of the family romance and the unromantic decisions we all make as we try to make sense of our lives and our memories.”
–Mary Gordon

“The Doctor’s Daughter marks Hilma Wolitzer’s much-anticipated return to the world of fiction. It is a beautiful tale of coming apart and reconciliation.”
–A. M. Homes

“An exquisitely nuanced novel that brilliantly examines one of the abiding truths of the human condition: the quest for self never ceases. Hilma Wolitzer’s new novel is just cause for celebration, as it shows her at the peak of her prodigious powers.”
–Robert Olen Butler

“Hilma Wolitzer’s characters are as real as the people next door. And, oh, the eye and ear at work here! The Doctor’s Daughter is a book I both admired and devoured.”
–Elinor Lipman

“To read Hilma Wolitzer is to laugh in a special way and to allow yourself little intermissions of sheer satisfaction in which you lay the open book facedown on your heart and snuggle with the human race. The Doctor’s Daughter is her masterpiece.”
–Gail Godwin

“This intensely readable book unfolds so gracefully that we are hardly aware of the many layers of the journey on which it takes us.”
–Elizabeth Strout

“Hilma Wolitzer’s The Doctor’s Daughter reminds us what novels can do. She takes a simple, touching, human situation and enlarges it into a heartbreaking and permanent story of loss and renewal.”
–Adam Gopnik

“This is a lovely novel–wonderfully well written, intelligent, perceptive, and rich.”
–Elizabeth Berg

Hilma Wolitzer is the author of several novels, including Hearts, Ending, and Tunnel of Love, as well as the nonfiction book The Company of Writers. She is a recipient of Guggenheim and NEA fellowships, and an Award in Literature from the American Academy and Institute of Arts and Letters. She has taught writing at the University of Iowa, New York University, and Columbia University. Hilma Wolitzer lives in New York City.
Loading...
or
Not Currently Available for Direct Purchase