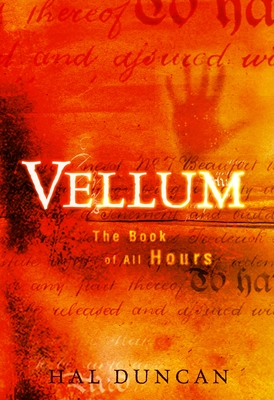 The Book of All Hours

An extraordinary, incendiary debut from a rare new talent, Vellum showcases a complex and sophisticated level of writing coupled with a fecund imagination that defies description.

It’s 2017 and angels and demons walk the earth. Once they were human; now they are unkin, transformed by the ancient machine-code language of reality itself. They seek The Book of All Hours, the mythical tome within which the blueprint for all reality is transcribed, which has been lost somewhere in the Vellum—the vast realm of eternity upon which our world is a mere scratch.

The Vellum, where the unkin are gathering for war.

The Vellum, where a fallen angel and a renegade devil are about to settle an age-old feud.

The Vellum, where the past, present, and future will collide with ancient worlds and myths.

Praise For Vellum: The Book of All Hours…

“In Vellum–a monstrously brilliant and often hilarious novel of mad Irishmen, bad angels, femmes fatales, and demons–we are presented with the tale of a war occurring throughout the breadth and depth of time and space. Hal Duncan has, at the very least, created the Guernica of science fiction.”
–Lucius Shepard, author of A Handbook of American Prayer

“A mind-blowing read that’s genuinely unlike anything you’ve ever read before . . . Vellum has expanded fantasy’s limits like nothing published in years.”
–SFX (five-star “must-read” review)

“Duncan’s writing is fluent and powerful. He possesses an imagination capable of both conjuring worlds and capturing the intricacies of moments. Vellum is more than a novel; it’s a vision.”
–Jeffrey Ford, author of The Girl in the Glass

“Vellum is a revelation–the opening gambit in the career of a mind-blowing colossal talent whose impact will be felt for decades.”
–Jeff VanderMeer, author of City of Saints and Madmen

Born in 1971, Hal Duncan grew up in small-town Ayrshire, Scotland, and now lives in the West End of Glasgow. He is a member of the Glasgow SF Writers’ Circle and is currently working part-time as a computer programmer. Vellum is his first novel.
Loading...
or
Not Currently Available for Direct Purchase