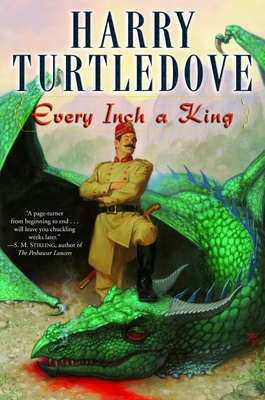 Every Inch a King (Paperback)

Otto of Schlepsig is risking his neck as an acrobat in a third-rate circus in the middle of nowhere when news arrives that the land of Shqiperi has invited Prince Halim Eddin to become its new king. Otto doesn’t know the prince from Adam, but he does happen to look just like him—a coincidence that inspires Otto with a mad plan to assume Halim’s identity and rule in his stead. True, Shqiperi is an uncivilized backwater, but even in uncivilized backwaters kings live better than acrobats. Plus, kingship in Shqiperi comes with a harem. Rank, as they say, has its privileges.

With his friend Max, a sword-swallowing giant whose chronic cough makes every performance a potential tonsillectomy, Otto embarks on a rollicking journey filled with feats of derring-do, wondrous magic, and beautiful maidens—well, beautiful women. And that’s before he enters a royal world that is truly fantastical.

Harry Turtledove is the award-winning author of the alternate-history works The Man with the Iron Heart, The Guns of the South, and How Few Remain (winner of the Sidewise Award for Best Novel); the Hot War books: Bombs Away, Fallout, and Armistice; the War That Came Early novels: Hitler’s War, West and East, The Big Switch, Coup d’Etat, Two Fronts, and Last Orders; the Worldwar saga: In the Balance, Tilting the Balance, Upsetting the Balance, and Striking the Balance; the Colonization books: Second Contact, Down to Earth, and Aftershocks; the Great War epics: American Front, Walk in Hell, and Breakthroughs; the American Empire novels: Blood and Iron, The Center Cannot Hold, and Victorious Opposition; and the Settling Accounts series: Return Engagement, Drive to the East, The Grapple, and In at the Death. Turtledove is married to fellow novelist Laura Frankos. They have three daughters—Alison, Rachel, and Rebecca—and two granddaughters, Cordelia Turtledove Katayanagi and Phoebe Quinn Turtledove Katayanagi.

Praise For Every Inch a King: A Novel…

“Turtledove is a master at weaving details of ordinary life into a much bigger canvas to produce a world that so easily could have been our own.”
–Tulsa World, on Blood and Iron

“Turtledove manages the difficult feat of telling a story that is consistently funny–and wistful, exciting, tragic and swashbuckling at the same time. The characters are intensely human and the setting marvelously Ruritanian, down to the smallest impeccable detail conveyed with a master's economical brushstroke.”
–S. M. Stirling
or
Not Currently Available for Direct Purchase
Copyright © 2020 American Booksellers Association