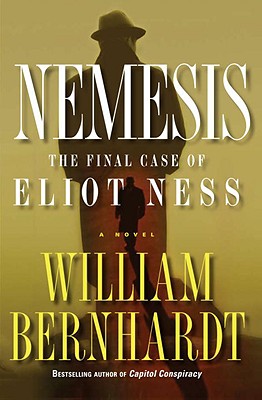 In his bestselling legal thrillers, William Bernhardt has explored the dark side of contemporary politics, power, and the law. Now Bernhardt turns back the clock to the city of Cleveland, Ohio, in the fall of 1935. Based on true events and new discoveries about Eliot Ness, Nemesis is a brilliantly told story featuring this legendary lawman’s fateful duel with a terrifyingly new kind of criminal: America’s first serial killer.

In Chicago, Eliot Ness had created “the Untouchables,” the fabled team of federal agents who were beyond corruption and who finally put Al Capone behind bars. Now the headline-grabbing Ness has been moved to Cleveland, where a new mayor desperately needs some positive publicity. The heroic, squeaky-clean Fed is the perfect man to become the city’s director of public safety, but by the time Ness starts his new job, a killer has started a career of his own. And this man is as obsessed with blood and mayhem as Eliot Ness is obsessed with justice.

One by one, bodies are found, each one decapitated and uniquely dissected with a doctor’s skill and a madman’s bent. The police are baffled, the population is terrorized, and newspaper headlines blare about the so-called “Torso Killer.” Though it’s not his turf, Ness is forced to cross bureaucratic boundaries and take over the case, working with a dogged, street-smart detective and making enemies every step of the way. The more energy Ness pours into the investigation, the more it takes over his life, his marriage, even his untouchable reputation. Because in Cleveland, there is only one true untouchable: a killer who has the perfect hiding place and the perfect plan for destroying Eliot Ness.

From the first primitive use of forensic psychology to a portrait of America battling the Great Depression and a man battling his own demons, Nemesis is a masterwork of mystery, murder, and vivid, dynamic historical suspense.

Praise For Nemesis: The Final Case of Eliot Ness A Novel…

“One of America’s legendary heroes comes to vivid life in William Bernhardt’s impressive Nemesis: The Final Case of Eliot Ness. This is a terrific story of madness and obsession: The plot is compelling, the writing crisp, and the dialogue evocative. Add to that the disclosure of the real-life identity of America’s first serial killer and you’ve got yourself a winner and then some.”
–John Lescroart, New York Times bestselling author of Betrayal

“Painted on a broad canvas, William Bernhardt’s Nemesis is expertly controlled, rich in imagery, blessed with fine characterization. Great authenticity, utter realism, and some fascinating legal skullduggery are woven together into a supple, elegant thriller. William Bernhardt is a born stylist, and his writing through the years has aged like a fine wine and is now sharper, deeper, and better than ever.”
–Steve Berry, New York Times bestselling author of The Charlemagne Pursuit

“The Untouchables. The Unknowns. The Unspeakable. Evil has many levels. In William Bernhardt’s chilling Nemesis: The Final Case of Eliot Ness, a real-life American hero descends to the bottom of it, confronting the most dangerous adversary of his career.”
–David Morrell, New York Times bestselling author of Creepers