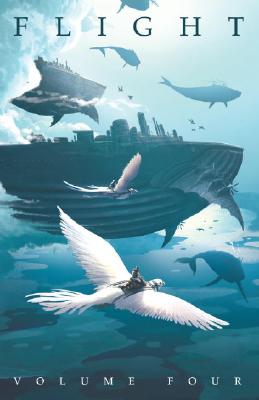 A full-color graphic anthology of short stories by some of the hottest creators in the field, "FLIGHT, Volume Four" is the newest addition to a great success story in graphic novel publishing.
Since 2004, when the first Volume of "Flight" burst on the scene, the publication of subsequent volumes has become a highly anticipated annual event. Artists are constantly contacting Kibuishi (the editor of the "Flight" volumes and himself a contributor), asking to be included in the next volume of "Flight." So it's no wonder "Flight" has ascended so rapidly in the graphic novel universe, becoming a fan favorite and developing a rabid following. Each contributor's story in the anthology represents a labor of love, and that fact shines through in the overall quality of the series.
With truly stellar art from masters of the field, this fantasy anthology is a must for comics connoisseurs and a delight to readers who like pretty stories. "Publishers Weekly" on "Flight, Volume Three" (Starred Review.)

Kazu Kibuishi was 24 years old and working full-time in the animation industry when he began developing the idea of doing "Flight." He began contacting his friends in the animation, comics, and graphic novel world to see if they would want to join the project. Little did he know that it would draw him into comics full-time. He now works from his home studio in Pasadena, California, creating and promoting "Flight" and his popular young adult comic "Daisy Kutter," which was nominated as an American Library Association Best Book for Young Adults -- the only graphic novel on the list in 2005.
Loading...
or
Not Currently Available for Direct Purchase