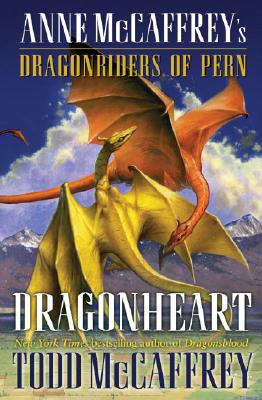 Todd McCaffrey’s first solo novel in the classic Dragonriders of Pern series, Dragonsblood, was hailed by critics and embraced by the countless devoted readers of the landmark science fiction saga created by his mother, Anne McCaffrey. Now the chronicles of Pern take another captivating turn as the embattled planet, the brave pioneers who call it home, and the magnificent flame-breathing creatures who fly high to protect it confront a dire new challenge.
The grim specter of sickness looms over the Weyrs of Pern, felling fire-lizards and posing a potentially devastating threat to their dragon cousins, Pern’s sole defense against the deadly phenomenon that is Thread. Fiona, the youngest and only surviving daughter of Lord Bemin, is just coming of age, and about to assume the duties of a Weyrwoman, when word spreads that dragons have indeed begun succumbing to the new contagion. With the next season of Threadfall quickly approaching, and the already diminished ranks of the dragons once more under siege, every Weyr across Pern is in crisis mode. It is hardly the time for disturbing distractions–such as the strange voice Fiona suddenly hears in her mind at the darkest and most urgent moments.

Circumstances and the mood of the weyrfolk worsen when advance patrols relay the dreaded news that black dust–the unmistakable herald of falling Thread–has been sighted. As more dragons sicken and die, leaving only a new generation of weyrlings too young to succeed them, Weyrleader B’Nik and queen rider Lorana arrive from Benden Weyr to comb Fort Weyr’s archives in a desperate search for clues from the past that may hold the solution to the plague.

But could the actual past itself prove the pathway to salvation for Pern’s stricken dragons and the entire imperiled planet? Guided by a mysterious ally from a wholly unexpected place, and trusting in the unique dragon gift for transcending time, Fiona will join a risky expedition with far-reaching consequences for both Pern’s future and her personal destiny.

“The torch has been passed and burns more brightly than ever in this latest chapter of the venerable Pern saga, the first of what one hopes will be many solo efforts by the son of series creator Anne McCaffrey. . . . This stand-alone tale fits beautifully into the existing history and style of earlier books while still breaking new ground.”
–Publishers Weekly (starred review)

“Todd McCaffrey does something I didn’t think anyone could do: he writes Anne McCaffrey’s Pern. . . . This is Pern, in the hands of a new master-grade harper, carefully trained in the old traditions, but scoring his own ballads. May the saga continue!”
–David Weber, author of By Schism Rent Asunder

“A dramatic, thoroughly captivating tale, steeped in the lore and well-drawn characterizations of the people and the dragons for which the Pern novels are prized. Fans old and new will be delighted.”
–Booklist

“Todd McCaffrey has inherited his mother’s storytelling ability. His dragons and fire-lizards, his harpers in Harper’s Hall, carry on the great traditions–and add much to them. Huzzah, Todd! You have learned wisdom indeed.”
–Jane Yolen, author of Briar Rose