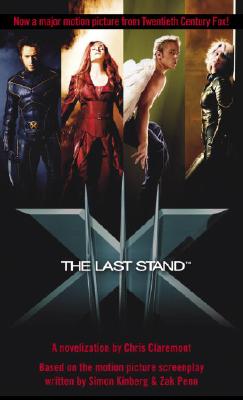 A novelization of the major motion picture!

The world has acquired a lethal new weapon against X-gene mutants, whose superhuman powers separate them–for better, for worse, forever–from ordinary mortals. Now, for the first time, mutants have a choice: retain their godlike abilities, though their powers may isolate and alienate them, or surrender them and become human. The mutant antibody is called a cure, but its invention may trigger a struggle that destroys every living soul on Earth.

As Magneto declares all-out war against humanity and its dreaded cure, the U.S. president mobilizes the military. But it is Charles Xavier and the X-Men who truly must brace for the ultimate battle, for they alone are powerful enough to determine the outcome.

Lessons of the past are useless in the coming life-and-death conflict, as new players–mutants possessing unprecedented, unearthly skills– take center stage. With so many joining forces with Magneto’s evil Brotherhood, the X-Men will face their ultimate test against an enemy whose forces far outnumber their own.

Now, as the world trembles, the Phoenix slowly rises. . .

Chris Claremont is one of the bestselling comic writers in the world. He wrote The Uncanny X-Men for seventeen years as well as the novelization of the movie X-Men 2. He has been the co-creator of several top-selling series for Marvel Comics, including Excalibur, Wolverine, New Mutants, and, in the United Kingdom, Captain Britain. He wrote the Star Trek twenty-fifth-anniversary graphic novel Debt of Honor and a Next Generation sequel, Cry, Vengeance, for DC Comics, as well as Alien/Predator: The Deadliest of Species for Dark Horse. His debut novel was Firstflight, the story of a young female astronaut in the twenty-first century, to which he wrote two sequels, Grounded and Sundowner. He collaborated with George Lucas on three novels in The Chronicles of the Shadow War, and has delved into fantasy with the publication of Dragon Moon, a dark fantasy novel co-authored with his wife, Beth Fleisher. The couple lives in Brooklyn with their two children.
Loading...
or
Not Currently Available for Direct Purchase