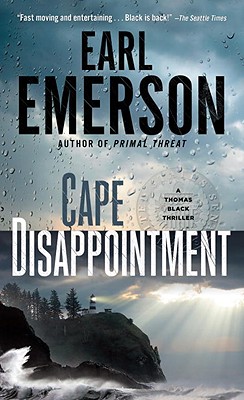 The bomb that nearly killed Thomas Black went off in a school gymnasium after a Senate candidate had spoken. When Black—widower, hero, and private investigator—is released from the hospital, he must face the fact that his wife, Kathy, who died in a plane crash weeks before the bombing, is really gone for good. Or is she? Black believes he sees Kathy in a passing truck. Her cell phone, which should be on the bottom of the sea, calls his in the middle of the night. And the explanations investigators give for the crash just don’t make sense. Now Black is interested in what a former CIA hit man has been trying to tell him about the plane crash. Suddenly, Black is on the run, caught in a web of personal and political lies and a plot that is killing everyone it touches.

“Conspiracy buffs should enjoy this thriller with its references to real-life events . . . while Thomas Black fans will welcome his return after a long hiatus.”—Publishers Weekly

“A welcome return for a popular series.”—Booklist

“An intriguing and exciting thriller.”—BookLoons

Earl Emerson is the Shamus Award-winning author of the Thomas Black detective series, which includes The Million-Dollar Tattoo, Deception Pass, and Catfish Cafe, as well as several other novels, most recently Primal Threat, Firetrap, and The Smoke Room. A lieutenant in the Seattle Fire Department, he lives in North Bend, Washington.
Loading...
or
Not Currently Available for Direct Purchase