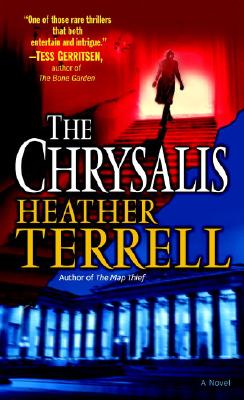 Haarlem, Holland, seventeenth-century: The city’s chief magistrate commissions a family portrait from Dutch master painter Johannes Miereveld. But when the artist sees the magistrate’s daughter, Amalia, an illicit love affair begins. Miereveld creates a captivating masterpiece, The Chrysalis–a stunning portrait of the Virgin Mary, full of Catholic symbols, that outrages his Protestant patron and signals the death of his career.

New York, present day: Mara Coyne is one high-profile case away from making partner at her powerful Manhattan law firm, and now the client that is sure to seal the deal has fallen into her lap. The prestigious Beazley’s auction house is about to sell a lost masterwork, The Chrysalis, in an auction that is destined to become legendary. Standing in the way, however, is the shocking accusation that the painting belongs not to Beazley’s client but to Hilda Baum, the daughter of a Dutch collector who lost his paintings–and his life–to the Nazis.

The case brings an unexpected surprise when Mara discovers that Beazley’s in-house attorney is Michael Roarke, a man for whom she once had an intense attraction. But the same skills that make her a brilliant litigator also make Mara suspicious, and she begins to believe that Hilda’s tragic family story might be more than just heartbreaking–it might be true. And the man she’s come to love might not be who she thought he was at all.

Spanning centuries and continents, The Chrysalis is a brilliant, intelligent, fast-paced thriller that melds art and history into a provocative work of fiction. From the underground Catholicism in seventeenth-century Holland to the unspeakable crimes of the Nazis and the repercussions that reverberate to this day throughout the art world, Heather Terrell has created a fascinating story that will entrance readers to the very last page.

Praise For The Chrysalis: A Novel…

Advance praise for The Chrysalis

“Fascinating history and assured storytelling make The Chrysalis one of those rare thrillers that both entertain and intrigue. This is a terrific debut!”
–Tess Gerritsen, New York Times bestselling author of The Mephisto Club

“Flemish art, Nazi skullduggery, and American money–in The Chrysalis, Heather Terrell follows the path of a famous painting through an important period of history that must not be forgotten, and interweaves the stories of three centuries into a dark cocoon of intrigue and suspense.”
–Katherine Neville, New York Times bestselling author of The Eight

“Only someone who feels a real love for art and the power of justice could have written a book like this.”
–Javier Sierra, New York Times bestselling author of The Secret Supper

Heather Terrell is a lawyer with more than ten years’ experience as a litigator at two of the country’s premier law firms and for Fortune 500 companies. She is a graduate of Boston College and of the Boston University School of Law. She lives in Pittsburgh. The Chrysalis is her first novel.
Loading...
or
Not Currently Available for Direct Purchase