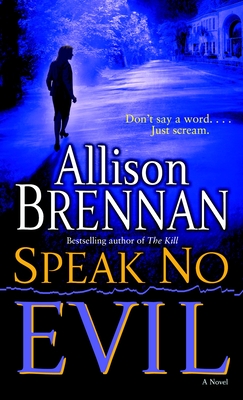 The murder of eighteen-year-old Angie Vance was exceptionally vile–her mouth was sealed with glue, an obscenity was scrawled across her skin, and she was suffocated in a garbage bag. The killing seems personal, so police detective Carina Kincaid focuses her efforts on the victim’s much older ex-boyfriend, Steve Thomas. But without physical evidence, Carina can’t make a collar or a case. She also can’t stop Sheriff Nick Thomas, the prime suspect’s brother, from conducting his own unwelcome investigation.

Though Nick is still scarred and unsteady from a recent confrontation with a serial killer, he’s determined to prove his brother’s innocence. But his confidence is shaken when he learns of Steve’s dark side, and when a friend of the murdered girl meets a similarly gruesome fate. With no time to lose, Carina and Nick work together to trap a psychopath, before another unlucky woman faces an unspeakable end.

Allison Brennan is the New York Times bestselling author of many romantic thrillers, including Kiss Me, Kill Me; Love Me to Death; Sudden Death; and Killing Fear. A five-time RITA finalist and Daphne du Maurier Award winner, Brennan enjoys spending her free time reading, playing games, watching high school sports, and researching her novels. A member of Romance Writers of America, Mystery Writers of America, and International Thriller Writers, Allison Brennan lives in Northern California with her husband, Dan, and their five children.
Loading...
or
Not Currently Available for Direct Purchase