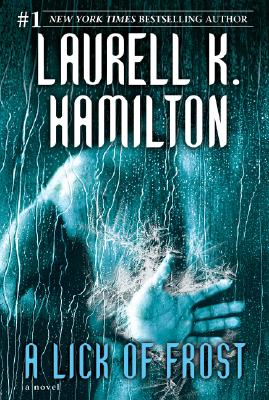 A Lick of Frost

I am Meredith Gentry, princess and heir apparent to the throne in the realm of faerie, onetime private investigator in the mortal world. To be crowned queen, I must first continue the royal bloodline and give birth to an heir of my own. If I fail, my aunt, Queen Andais, will be free to do what she most desires: install her twisted son, Cel, as monarch . . . and kill me.

My royal guards surround me, and my best loved–my Darkness and my Killing Frost–are always beside me, sworn to protect and make love to me. But still the threat grows greater. For despite all my carnal efforts, I remain childless, while the machinations of my sinister, sadistic Queen and her confederates remain tireless. So my bodyguards and I have slipped back into Los Angeles, hoping to outrun the gathering shadows of court intrigue. But even exile isn’t enough to escape the grasp of those with dark designs.

Now King Taranis, powerful and vainglorious ruler of faerie’s Seelie Court, has leveled accusations against my noble guards of a heinous crime–and has gone so far as to ask the mortal authorities to prosecute. If he succeeds, my men face extradition to faerie and the hideous penalties that await them there. But I know that Taranis’s charges are baseless, and I sense that his true target is me. He tried to kill me when I was a child. Now I fear his intentions are far more terrifying.

Praise For A Lick of Frost…

A Kiss of Shadows

A Caress of Twilight

“Sensual, without a doubt . . . This book moves like a whirlwind.”
–St. Louis Post-Dispatch

“This [faerie] society is one of the most detailed, imaginative, and lovingly drawn in all fantastic fiction, and the Meredith Gentry series has become something special.”
–San Jose Mercury News

A Stroke of Midnight

“Steamy . . . will have Hamilton’s fans panting for more.”
–Publishers Weekly