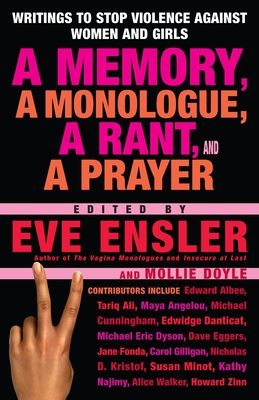 A Memory, a Monologue, a Rant, and a Prayer

Writings to Stop Violence Against Women and Girls

Selections from the “Until the Violence Stops” Festival

This groundbreaking collection, edited by author and playwright Eve Ensler, features pieces from “Until the Violence Stops,” the international tour that brings the issue of violence against women and girls to the forefront of our consciousness. These diverse voices rise up in a collective roar to break open, expose, and examine the insidiousness of brutality, neglect, a punch, or a put-down. Here is Edward Albee on S&M; Maya Angelou on women’s work; Michael Cunningham on self-mutilation; Dave Eggers on a Sudanese
abduction; Carol Gilligan on a daughter witnessing her mother being hit; Susan Miller on raising a son as a single mother; and Sharon Olds on a bra.

These writings are inspired, funny, angry, heartfelt, tragic, and beautiful. But above all, together they create a true and profound portrait of this issue’s effect on every one of us. With information on how to organize an “Until the Violence Stops” event in your community, A Memory, a Monologue, a Rant, and a Prayer is a call to the world to demand an end to violence against women.

“In the current era, it takes some brain racking to think of anyone else doing anything quite like Ensler. She’s a countercultural consciousness-raiser, an empowering figure, a truth-teller.”
–Chicago Tribune

Eve Ensler is an internationally bestselling author and an acclaimed playwright whose works for the stage include The Vagina Monologues, Necessary Targets, and The Good Body. She is the author of Insecure at Last, a political memoir. Ensler is the founder of V-Day, the global movement to end violence against women and girls. In the last decade, V-Day has raised more than $70 million for grassroots groups that work to end violence against women and girls around the world. Eve Ensler lives in Paris and New York City.
Loading...
or
Not Currently Available for Direct Purchase