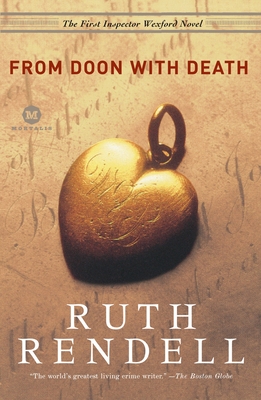 From Doon with Death (Paperback)

Dazzling psychological suspense. Razor-sharp dialogue. Plots that catch and hold like a noose. These are the hallmarks of crime legend Ruth Rendell, “the best mystery writer in the English-speaking world” (Time magazine). From Doon with Death, now in a striking new paperback edition, is her classic debut novel—and the book that introduced one of the most popular sleuths of the twentieth century.

There is nothing extraordinary about Margaret Parsons, a timid housewife in the quiet town of Kingsmarkham, a woman devoted to her garden, her kitchen, her husband. Except that Margaret Parsons is dead, brutally strangled, her body abandoned in the nearby woods.

Who would kill someone with nothing to hide? Inspector Wexford, the formidable chief of police, feels baffled -- until he discovers Margaret's dark secret: a trove of rare books, each volume breathlessly inscribed by a passionate lover identified only as Doon. As Wexford delves deeper into both Mrs. Parsons’ past and the wary community circling round her memory like wolves, the case builds with relentless momentum to a surprise finale as clever as it is blindsiding.

In From Doon with Death, Ruth Rendell instantly mastered the form that would become synonymous with her name. Chilling, richly characterized, and ingeniously constructed, this is psychological suspense at its very finest.

Praise for From Doon with Death

“One of the most remarkable novelists of her generation.”—People

“She has transcended her genre by her remarkable imaginative power to explore and illuminate the dark corners of the human psyche.”—P.D. James

Ruth Rendell is the author of Road Rage, The Keys to the Street, Bloodlines, Simisola, and The Crocodile Bird. She is the winner of the Mystery Writers of America Grand Master Award. She is also the recipient of three Edgars from the Mystery Writers of America and four Gold Daggers from Great Britain’s Crime Writers Association. In 1997, she was named a life peer in the House of Lords. Rendell also writes mysteries under the name of Barbara Vine, of which A Dark-Adapted Eye is the most famous. She lives in England.

Praise For From Doon with Death: The First Inspector Wexford Mystery…

“One of the most remarkable novelists of her generation.”—People

“She has transcended her genre by her remarkable imaginative power to explore and illuminate the dark corners of the human psyche.”—P.D. James
or support indie stores by buying on
Copyright © 2020 American Booksellers Association