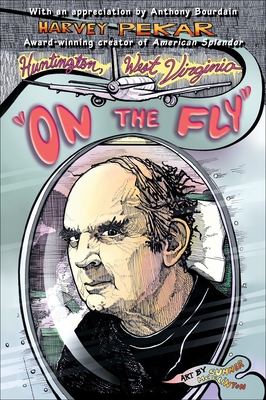 With an appreciation by Anthony Bourdain

HAVE ATTITUDE, WILL TRAVEL

Harvey Pekar changed the face of comics when his American Splendor series replaced traditional slam-bang superhero action with slice-of-life tales of his own very ordinary existence in Cleveland, Ohio, as a file clerk, jazz-record collector, and philosophical curmudgeon. Much as Seinfeld famously transcended sitcom conventions by being “a show about nothing,” Pekar’s deadpan chronicles of regular life—peppered with wry and caustic reflections—have transformed comics from escapist fantasy into social commentary with voice balloons.

Huntington, West Virginia “On the Fly” is prime Pekar, recounting the irascible everyman’s on-the-road encounters with a cross section of characters—a career criminal turned limo-driving entrepreneur, a toy merchant obsessed with restoring a vintage diner, comic-book archivists, indie filmmakers, and children of the sixties—all of whom have stories to tell. By turns funny, poignant, and insightful, these portraits à la Pekar showcase a one-of-a-kind master at work, channeling the stuff of average life into genuine American art.

Harvey Pekar, a native of Cleveland, is best known for his autobiographical slice-of-life comic book series American Splendor, a first person account of his downtrodden life. He is also a jazz critic whose reviews have been published in The Boston Herald, The Austin Chronicle, and Jazz Times. He has done freelance work for the critically acclaimed radio station WKSU and has appeared many times on Late Night with David Letterman.

Praise For Huntington, West Virginia "On the Fly"…

“A visit with Harvey Pekar . . . will cause you to reexamine your own life . . . just as the greatest literature will.”—Austin Chronicle