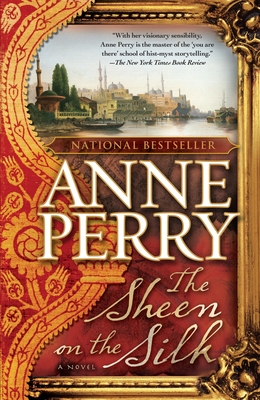 The Sheen on the Silk

Arriving in Constantinople in 1273, Anna Zarides vows to prove the innocence of her twin brother, Justinian, who has been exiled to the desert for conspiring to kill a nobleman. Disguising herself as a eunuch named Anastasius, Anna moves freely about in society, maneuvering close to the key players involved in her brother’s fate, including Zoe Chrysaphes, a devious noblewoman with her own hidden agenda, and Giuliano Dandolo, a ship’s captain conflicted by his growing feelings for Anastasius. As leaders in Rome and Venice plot to invade Constantinople in another Crusade to capture the Holy Land, Anna’s discoveries draw her inextricably closer to the dangers of the emperor’s treacherous court—where it seems that no one is exactly who he or she appears to be.

Praise For The Sheen on the Silk: A Novel…

“With her visionary sensibility, Anne Perry is the master of the ‘you are there’ school of hist-myst storytelling.”—The New York Times Book Review

“Remarkable . . . [Anne Perry sets] an engaging personal story against a rich backdrop of events to convey the intrigue and extreme peril that characterized the struggles between the faiths of the countries bordering the Mediterranean in the thirteenth century.”—The Star-Ledger

“[Perry] gives the reader a real feel for the sights, sounds and smells of Constantinople in the time of the Crusades, as well as tastes of Venice, Rome, Sicily, and Jerusalem.”—St. Louis Post-Dispatch

“[A] grandly scaled epic . . . with a canny eye for drama, [Perry] makes this complex historical background both vivid and clear.”—Kirkus Reviews

Anne Perry is the bestselling author of two acclaimed series set in Victorian England: the William Monk novels, including Dark Assassin and The Shifting Tide, and the Charlotte and Thomas Pitt novels, including Buckingham Palace Gardens and Long Spoon Lane. She is also the author of the World War I novels No Graves As Yet, Shoulder the Sky, Angels in the Gloom, At Some Disputed Barricade,and We Shall Not Sleep, as well as six holiday novels, most recently A Christmas Grace. Anne Perry lives in Scotland.
Loading...
or support indie stores by buying on
(This book is on backorder)