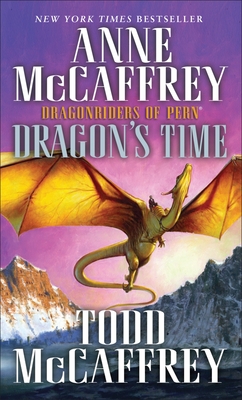 Even though Lorana cured the plague that was killing the dragons of Pern, sacrificing her queen dragon in the process, the devastating disease has left too few dragons alive to fight the fall of deadly Thread. As morale at Telgar Weyr plunges in the wake of the widespread loss, and Weyrwoman Fiona and the harper Kindan struggle to keep hope from vanishing, a pregnant Lorana decides she must take drastic steps. Nothing short of manipulating time itself will undo the damage done by the plague. But attempting time travel could have devastating consequences—altering history, and destiny, forever. Now, somehow, Lorana must find a way to accomplish what seems impossible: bending the natural laws of the universe without wreaking havoc on existence itself. To ensure the future of Pern, she’s willing to take the fateful chance—even if it demands yet another, far greater, sacrifice.

“Smooth, clear writing allows the well-realized characters to resonate with the world of Pern.”—Publishers Weekly

Anne McCaffrey, the Hugo Award–winning author of the bestselling Dragonriders of Pern® novels, is one of science fiction’s most popular authors. She recently collaborated with Elizabeth Ann Scarborough on the Tale of the Barque Cats books: Catalyst and Catacombs. She lives in a house of her own design, Dragonhold-Underhill, in County Wicklow, Ireland.

Todd McCaffrey is the bestselling author of the Pern novels Dragonsblood, Dragonheart, and Dragongirl, and the co-author, with his mother, Anne McCaffrey, of Dragon’s Kin, Dragon’s Fire, Dragon Harper, and Sky Dragons. A computer engineer, he currently lives in Los Angeles. Having grown up in Ireland with the epic of the Dragonriders of Pern,® he is bursting with ideas for new stories of that world, its people, and its dragons.