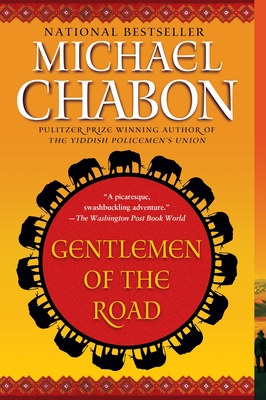 Gentlemen of the Road (Paperback)

A Tale of Adventure [title page only]

They’re an odd pair, to be sure: pale, rail-thin, black-clad Zelikman, a moody, itinerant physician fond of jaunty headgear, and ex-soldier Amram, a gray-haired giant of a man as quick with a razor-tongued witticism as with a sharpened battle-ax. Brothers under the skin, comrades in arms, they make their rootless way through the Caucasus Mountains, circa a.d. 950, living as they please and surviving however they can—as blades and thieves for hire and as practiced bamboozlers, cheerfully separating the gullible from their money. But when they are dragooned into service as escorts and defenders to a prince of the Khazar Empire, they soon find themselves the half-willing generals in a full-scale revolution—on a road paved with warriors and whores, evil emperors and extraordinary elephants, secrets, swordplay, and such stuff as the grandest adventures are made of.

Praise for Gentlemen of the Road

“Within a few pages I was happily tangled in [Chabon’s] net of finely filigreed language, seduced by an old-school-style swashbuckling quest . . . laced with surprises and humor.”—San Francisco Chronicle

“The action is intricate and exuberant. . . . It’s hard to resist its gathering momentum, not to mention the sheer headlong pleasure of Chabon’s language.”—The New York Times Book Review

“[A] wild, wild adventure . . . abounds with lush language . . . This book roars to be read aloud.”—Chicago Sun-Times

Michael Chabon is the author of The Mysteries of Pittsburgh; Wonder Boys, which was made into a critically acclaimed film; The Amazing Adventures of Kavalier & Clay, which won numerous awards, including the Pulitzer Prize; The Final Solution: A Story of Detection; and The Yiddish Policemen’s Union. He is also the author of two short-story collections and a young adult novel, Summerland. He lives in the San Francisco Bay area.

Praise For Gentlemen of the Road: A Tale of Adventure [title page only]…

“Michael Chabon can write like a magical spider, effortlessly spinning out elaborate webs of words that ensnare the reader with their beauty and their style.”
–The New York Times

“[Michael Chabon] is, simply, the coolest writer in America.”
–The Christian Science Monitor

“[Chabon is a] stupendously gifted and accomplished writer . . . a writer not merely of rare skill and wit but of self-evident and immensely appealing generosity.”
–The Washington Post Book World

“Whether making us laugh or making us feel the breathtaking impermanence of things, Michael Chabon keeps us wide awake and reading.”
–Alan Cheuse, All Things Considered

“From his editorship of an issue of McSweeny’s to his Pulitzer Prize-winning Amazing Adventures of Kavalier & Clay, Chabon has mined genre fiction and pop culture in pursuit of literary gold.”
–Bookmarks
or support indie stores by buying on
Copyright © 2020 American Booksellers Association