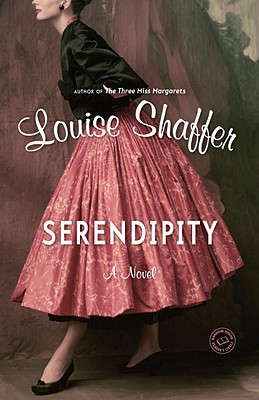 Louise Shaffer brings to life three generations of Italian American women in this stunning novel of surprises, secrets, and serendipity.

A child of theatrical royalty, Carrie Manning is having a hard time getting her own act together. Thirty-seven, aimless, and having just buried a famous mother she never understood, she is desperate to uncover her family’s mysterious past in the hopes that it will help her understand herself.

Carrie’s search reveals the fascinating life stories of her estranged grandmother Lu, a glamorous Broadway star whose dreams came with a price; her great grandmother Mifalda, who gave up everything to come to America as a sixteen-year-old Italian bride; and her father, Bobby, the charismatic Broadway genius who wrote some of Lu’s greatest musicals and died tragically young. At the heart of Carrie’s discoveries lies the reason for her mother’s complicated life, and a dark secret that has been buried for thirty years.

Praise For Serendipity: A Novel…

“Shaffer . . . unfolds the story of Carrie’s family, from her Italian great grandmother’s sacrifices to her mother’s complicated past, with such ease it is as though one is having an engaging conversation with the characters. All the female characters . . . are refreshingly multidimensional and come wonderfully to life. Highly recommended.”—Library Journal, starred review

"This was an amazing story of mothers and daughters and how each generations relationships can affect the next. A story of a woman finally finding her place in the world, and finding the happiness she so richly deserves. This is a book that you don't want to miss ~ but make sure you keep the tissues close by. You're going to need them."—Lori's Reading Corner

Louise Shaffer is the author of Family Acts, The Ladies of Garrison Gardens, and The Three Miss Margarets. A graduate of Yale Drama School, she has written for television, and has appeared on Broadway, in TV movies, and in daytime dramas, earning an Emmy for her work on Ryan’s Hope. Shaffer and her husband live in the Lower Hudson Valley.

www.louiseshaffer.com
Loading...
or
Not Currently Available for Direct Purchase