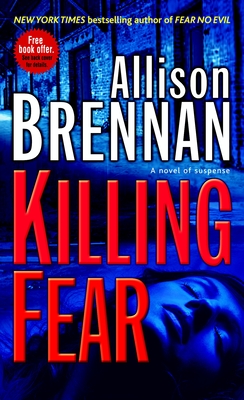 “[Brennan] is making a name for herself by producing not only memorable heroes but also unforgettable villains.”—Romantic Times Book Reviews

Theodore Glenn loves to inflict pain . . . both on his victims and on those who later find the mutilated corpses. At his trial seven years ago, Glenn vowed vengeance on Detective Will Hooper, the cop who nabbed him, and beautiful Robin McKenna, the stripper whose testimony put him behind bars.

When a catastrophic disaster sets Glenn free, he blazes a freshly bloodied path across San Diego County. But the death he craves most is Robin McKenna’s.

Putting aside their past troubled relationship, Will rushes to protect Robin, now a savvy businesswoman operating an upscale club. As the killings mount and Glenn proves a master manipulator, Robin and Will become snared in a twisted web of horror. But the shocking truth is even worse: The evil they are to face is even deadlier than they fear.

Allison Brennan is the author of The Prey, The Hunt, The Kill, Speak No Evil, See No Evil, and Fear No Evil. For thirteen years she worked as a consultant in the California State Legislature before leaving to devote herself fully to her family and writing. She is a member of Romance Writers of America, Mystery Writers of America, and International Thriller Writers. She lives in Northern California with her husband, Dan, and their five children.

www.allisonbrennan.com
Loading...
or
Not Currently Available for Direct Purchase