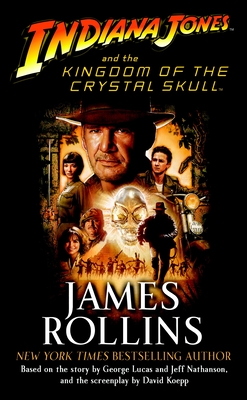 Everyone’s favorite globe-trotting, wisecracking archaeologist is hurtling headfirst into high adventure and relying on his wits, his fists, and his trusty bullwhip to get him out of deep trouble.

A novelization of the major motion picture

It’s 1957, and the Cold War is heating up. A ruthless squad of Russian soldiers crashes Indiana Jones’s latest expedition and forces the unwilling Indy along as they brazenly invade American soil, massacre U.S. soldiers, and plunder a top-secret government warehouse. Commanded by a sword-wielding colonel who’s as sinister as she is stunning, the menacing Reds have one objective: a relic even more precious—and powerful—than the mythic Ark of the Covenant, capable of unlocking secrets beyond human comprehension.

Quick thinking and some high-speed maneuvers help Indy narrowly escape certain death. But the Russians are unrelenting, and their next move leads Indy into the depths of the Amazon on a desperate rescue mission. With a hotheaded teenage biker as his unlikely wing man and his vengeful new Russian nemesis waiting for a rematch, Indy’s back in the game—playing for a prize all the wonders of the world could never rival.

James Rollins is the bestselling author of nine previous novels: Subterranean, Excavation, Deep Fathom, Amazonia, Ice Hunt, Sandstorm, Map of Bones, Black Order and The Judas Strain. He has a doctorate in veterinary medicine and his own practice in Sacramento, California. An amateur spelunker and a certified scuba enthusiast, he can often be found either underground or underwater.
or
Not Currently Available for Direct Purchase
Copyright © 2020 American Booksellers Association