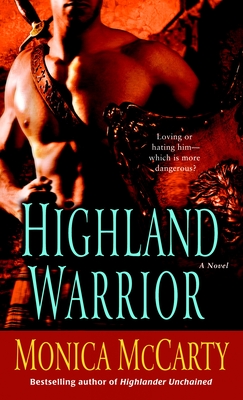 The ruthless enforcer of Scotland’s most powerful clan, Jamie Campbell will use any means necessary to vanquish lawlessness and unrest among the feuding Highland clans. Seduction is a game as easily played as subterfuge, but when Jamie poses a as suitor to a rival clan’s daughter in order to expose treason, the line between duty and pleasure is suddenly blurred. Ebony-haired, ruby-lipped Caitrina Lamont defies him, denies him, and arouses him like no other woman.

Caitrina has no intention of forsaking her beloved father and doting brothers for a husband–especially a hated Campbell. But Jamie’s raw, sensual strength and searing kiss melt her resistance. When her idyllic world is shattered, Caitrina’s only hope to save her clan lies in the arms of Jamie Campbell, the enemy she holds accountable for its ruin. Can their tenuous truce, born in the velvet darkness of passionate nights, forge a love as strong as the sword that rules the Highlands?

Monica McCarty is the bestselling author of the Highlander trilogy (Highlander Untamed, Highlander Unmasked, and Highlander Unchained). Her interest in the Scottish clan system began in the most unlikely of places: a comparative legal history course at Stanford Law School. After a short but enjoyable stint practicing law, she realized that her legal vocation and her husband’s transitory career as a professional baseball player were not exactly a match made in heaven. So McCarty traded in her legal briefs for Scottish historical romances with sexy alpha heroes. She lives in the San Francisco Bay Area with her husband and their two young children.

“McCarty has captured the true feel and essence of the Scottish Highlands. . . . Most authors aren’t this good from the start.”
–Night Owl Reviews
or support indie stores by buying on
(This book is on backorder)
Copyright © 2020 American Booksellers Association