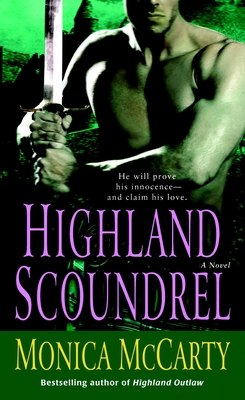 Framed for a crime he did not commit, Duncan Campbell, the illegitimate son of a chieftain, has returned to the Highlands determined to clear his name after ten years in exile. He is drawn to the unforgettable sensual beauty of Jeannie Gordon, the headstrong girl who once pledged him her love, gave him her innocence, and then betrayed him. Now, in the glow of the moonlight, she defiantly shows Duncan the bad end of a pistol.

Jeannie is stunned to discover that the broad-chested brigand she just shot is the rogue who broke her heart years ago. No longer a starry-eyed girl but a woman with dangerous secrets, Jeannie cannot forgive Duncan’s shattering mistrust of her–nor can she sign his death warrant by turning him in. Soon passion flares hotter and bolder than before, sealing a fate the onetime lovers can no longer deny. Caught up in a deadly game of murder and intrigue, Jeannie is willing to risk everything for a man and a love she vows never to lose again.

“These are three great Scottish stories, by a first-time author, you don’t want to miss.”—Fresh Fiction

“McCarty has captured the true feel and essence of the Scottish Highlands. . . . Most authors aren’t this good from the start.”—Night Owl Reviews

Monica McCarty is the bestselling author of the Highlander trilogy (Highlander Untamed, Highlander Unmasked, and Highlander Unchained). Her interest in the Scottish clan system began in the most unlikely of places: a comparative legal history course at Stanford Law School. After a short but enjoyable stint practicing law, she realized that her legal vocation and her husband’s transitory career as a professional baseball player were not exactly a match made in heaven. So McCarty traded in her legal briefs for Scottish historical romances with sexy alpha heroes. She lives in the San Francisco Bay Area with her husband and their two young children.
Loading...
or
Not Currently Available for Direct Purchase