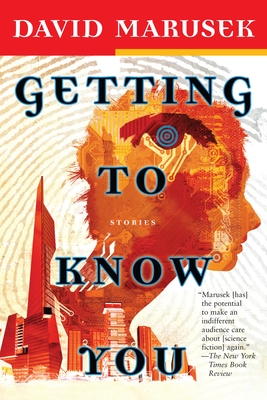 Getting to Know You (Paperback)

Not since William Gibson and Bruce Sterling galvanized science fiction in the 1980s has the emergence of a new writer been heralded with such acclaim as that attending David Marusek, whose brilliant first novel, Counting Heads, appeared to rave reviews in 2005. But Marusek did not come out of nowhere. Aficionados of the genre had already taken note of his groundbreaking short fiction: masterfully written, profoundly thought-out examinations of futures so real they seemed virtually inevitable.

Now, in this collection of ten short stories, Marusek’s fierce imagination and dazzling extrapolative gifts are on full display. Five of the stories, including the Sturgeon Award-winning “The Wedding Album,” a shattering look at the unintended human consequences of advanced technology, are set in the same future as Counting Heads. All ten showcase Marusek’ s talent for literate, provocative science fiction of the very highest order.

Praise For Getting to Know You: Stories…

“Marusek [has] the potential to make an indifferent audience care about [science fiction] again.”
–The New York Times Book Review

“Marusek is one of the best-kept secrets of science fiction, a wild talent with a Gibson-grade imagination and marvelous prose, and a keen sense of human drama that makes it all go.”
–Cory Doctorow

“David Marusek, showing a potentially volatile synergy of technology and human foibles, is a writer who gives the impression that he’s been to the future, seen it work, and has come back to tell us all about it.”
–Locus