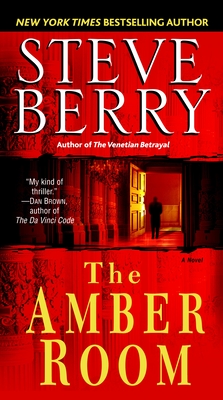 Atlanta judge Rachel Cutler loves her job and her kids, but her life takes a dark turn when her father dies under strange circumstances, leaving behind clues to a secret about one of the greatest treasures ever made by man. Forged of the exquisite gem, the Amber Room inexplicably disappeared sometime during World War II. Determined to solve its mysteries, Rachel takes off for Germany with her ex-husband, Paul, close behind. Before long, they’re in over their heads. Locked into a treacherous game with professional killers, Rachel and Paul find themselves on a collision course with the forces of greed, power, and history itself.

Praise for The Amber Room

Praise For The Amber Room: A Novel of Suspense…

“Sexy, illuminating, and confident. The Amber Room is my kind of thriller—a globe-trotting treasure hunt packed with exotic locales, sumptuous art, and ruthless villains. Steve Berry writes with the self-assured style of a veteran.”—Dan Brown, author of The Da Vinci Code

“The Amber Room is a riveting cat-and-mouse game set within the world of international art thieves, assassins, and age-old rivalries. From the opening shocker set in a Nazi concentration camp to the chilling battle within a mountain-top castle, Steve Berry carries the reader on a harrowing journey into a past best left undiscovered. Not to be missed!”—James Rollins, author of Amazonia and Ice Hunt