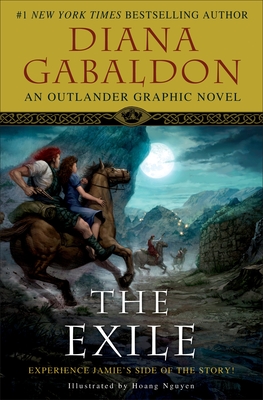 Diana Gabaldon’s brilliant storytelling has captivated millions of readers in her bestselling and award-winning Outlander saga. Now, in her first-ever graphic novel, Gabaldon gives readers a fresh look at the events of the original Outlander: Jamie Fraser’s side of the story, gorgeously rendered by artist Hoang Nguyen.

After too long an absence, Jamie Fraser is coming home to Scotland—but not without great trepidation. Though his beloved godfather, Murtagh, promised Jamie’s late parents he’d watch over their brash son, making good on that vow will be no easy task. There’s already a fat bounty on the young exile’s head, courtesy of Captain Black Jack Randall, the sadistic British officer who’s crossed paths—and swords—with Jamie in the past. And in the court of the mighty MacKenzie clan, Jamie is a pawn in the power struggle between his uncles: aging chieftain Colum, who demands his nephew’s loyalty—or his life—and Dougal, war chieftain of Clan MacKenzie, who’d sooner see Jamie put to the sword than anointed Colum’s heir.

And then there is Claire Randall—mysterious, beautiful, and strong-willed, who appears in Jamie’s life to stir his  compassion . . . and arouse his desire.

But even as Jamie’s heart draws him to Claire, Murtagh is certain she’s been sent by the Old Ones, and Captain Randall accuses her of being a spy. Claire clearly has something to hide, though Jamie can’t believe she could pose him any danger. Still, he knows she is torn between two choices—a life with him, and whatever it is that draws her thoughts so often elsewhere.

Step into the captivating, passionate, and suspenseful world of The Exile, and experience the storytelling magic of Diana Gabaldon as never before.

Diana Gabaldon is the New York Times bestselling author of the wildly popular Outlander novels—Outlander, Dragonfly in Amber, Voyager, Drums of Autumn, The Fiery Cross, A Breath of Snow and Ashes (for which she won a Quill Award and the Corine International Book Prize), and An Echo in the Bone—and one work of nonfiction, The Outlandish Companion, as well as the bestselling series featuring Lord John Grey, a character she introduced in Voyager. She lives in Scottsdale, Arizona.

Hoang Nguyen was born in Vietnam and emigrated to the United States at the age of nine. He has worked for Marvel, Dark Horse, and other comic publishers, and his original project Metal Militia was optioned by Dino De Laurentiis for feature film development. More recently he has worked in the videogame industry, having contributed to such well-known titles as the Elder Scrolls series for Bethesda Softworks. He was the lead artist and character designer on Dead to Rights for Namco and is currently a consultant for Namco Bandai Games.
Loading...
or support indie stores by buying on