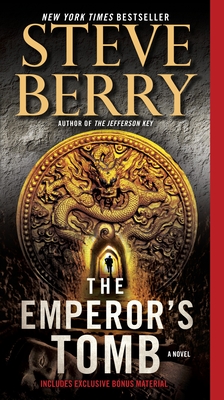 The Emperor's Tomb (with bonus short story The Balkan Escape)

Former Justice Department operative Cotton Malone has received an anonymous note carrying an unfamiliar Web address. Logging on, he’s shocked to see Cassiopeia Vitt, a woman who’s saved his life more than once, being tortured at the hands of a mysterious man who has a single demand: Bring me the artifact she’s asked you to keep safe. The only problem is, Malone doesn’t have a clue what the man is talking about, since Cassiopeia has left nothing with him. So begins Malone’s most harrowing adventure to date—one that offers up astounding historical revelations, pits him against a ruthless ancient brotherhood, and sends him from Denmark to Belgium to Vietnam then on to one of the greatest archaeological sites in the world: the tomb of China’s First Emperor, guarded by an underground army of terra-cotta warriors, which has inexplicably remained sealed for more than two thousand years—its mysteries about to be revealed.

DON’T MISS A SNEAK PEEK OF STEVE BERRY’S NEW NOVEL, THE JEFFERSON KEY, IN THE BACK OF THE BOOK.


Praise For The Emperor's Tomb (with bonus short story The Balkan Escape): A Novel (Cotton Malone #6)…

“This book combines [Steve] Berry’s action-packed thrills with an adventure through China . . . [a] seamless marriage of intense drama and cultural history.”—The Virginian-Pilot

“To read a tale by Steve Berry is to become an armchair world traveler and instant historian. . . . His stories are fast-moving, solid with research and provocative.”—Sacramento Bee