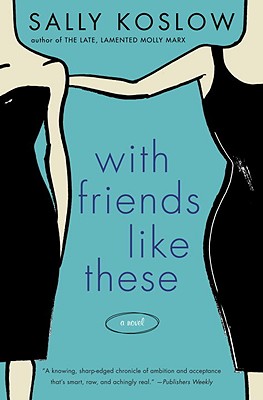 Have you ever been a less than perfect friend? To whom does your first loyalty belong—your best friend or your husband? With her trademark wit and empathy, Sally Koslow explores the entangled lives of women in this candid, fast-paced novel.

Quincy, Talia, Chloe, and Jules met in the early nineties after answering a roommate ad for a Manhattan apartment. Despite having little in common, the women became fast friends. A decade later, their lives have diverged, though their ties remain strong.

Quincy, a Midwestern introvert, is trying to overcome a set of tragedies by hunting for the perfect home; Talia, a high-energy Brooklyn wife and mom with an outspoken conscience, is growing resentful of her friends’ greater financial stability and her husband’s lack of ambition; timid Chloe, also a mother, is trying to deflect pressure from her husband, a hedge fund manager, to play the role of trophy wife; while Jules, a fiercely independent actress/entrepreneur with a wicked set of life rules, is confronting her forties alone.

When Jules gives her new boyfriend the inside scoop on the real estate gem Quincy is lusting after, and Talia chases a lucrative job earmarked for Chloe, the women are forced to wrestle with the challenges of love and motherhood. Will their friendships and marriages survive? And at what price? Punchy yet tender, a high-five to sisterhood, this book will hit an emotional bull’s-eye for anyone who has had—or been—less than a perfect friend.

“A great women’s fiction read that belongs on beach blankets this summer. It wonderfully tells the story of four friends who met when they share an apartment when they are just out of school and they move on into and out of each other’s lives. Told in chapters about each character, Koslow writes great cliffhangers.”—Bookreporter.com

“It’s a West Side story...Tragedy, comedy and plenty of Sex and the City in this summer novel.”—New York Post

“With Friends Like These is funny, but it’s also poignant …Very wise...You should find yourself rushing to the end, wondering if the women will ever be able to restore their friendships.”—Connecticut Post

“A knowing, sharp-edged chronicle of ambition and acceptance that's smart, raw, and achingly real…Koslow packs a trove of wit and wisdom into [this] package.”
—Publishers Weekly

“With Friends Like These explores complexities, contradictions of competitive sisterhood in the Big Apple with wit, good-natured humor.”—Basil and Spice

“A refreshingly honest look at friendships and how they change over time…Rich details make every page worth reading."--Charleston Post & Courier

"Good Read—Whether your feet are planted in the sand...or you're dipping your toes at the pool."– Better Homes & Gardens

“A quartet of women narrates this witty reflection on sisterhood.”– More magazine

Sally Koslow is the author of "With Friends Like These," "The Late, Lamented Molly Marx" and "Little Pink Slips." Her essays have been published in "More, O: The Oprah Magazine," and "The New York Observer," among other publications. She was the editor in chief of both "McCall's" and "Lifetime," was an editor at "Mademoiselle "and "Woman's Day," and teaches creative writing at the Writing Institute of Sarah Lawrence College. The mother of two sons, she lives in New York City with her husband.
Loading...
or
Not Currently Available for Direct Purchase