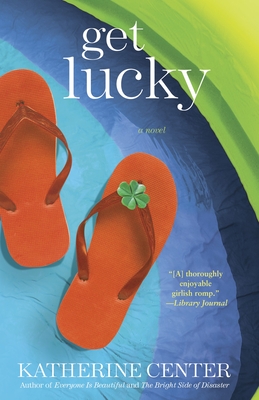 How do you change your luck? Katherine Center’s marvelously entertaining and poignant new novel is about choosing to look for happiness—and maybe getting lucky enough to find it.

Sarah Harper isn’t sure if the stupid decisions she sometimes makes are good choices in disguise—or if they’re really just stupid. But either way, after forwarding an inappropriate email to her entire company, she suddenly finds herself out of a job.

So she goes home to Houston—and her sister, Mackie—for Thanksgiving. But before Sarah can share her troubles with her sister, she learns that Mackie has some woes of her own: After years of trying, Mackie’s given up on having a baby—and plans to sell on eBay the entire nursery she’s set up. Which gives Sarah a brilliant idea—an idea that could fix everyone’s problems. An idea that gives Sarah the chance to take care of her big sister for once—instead of the other way around.

But nothing worthwhile is ever easy. After a decade away, Sarah is forced to confront one ghost from her past after another: the father she’s lost touch with, the memories of her mother, the sweet guy she dumped horribly in high school. Soon everything that matters is on the line—and Sarah can only hope that by changing her life she has changed her luck, too.

Katherine Center graduated from Vassar College, where she won the Vassar College Fiction Prize, and received an MA in fiction from the University of Houston. She served as fiction co-editor for the literary magazine Gulf Coast, and her graduate thesis, Peepshow, a collection of stories, was a finalist for the Mary McCarthy Prize in Short Fiction. A former freelancer and teacher, she lives in Houston with her husband and two young children.

Praise For Get Lucky: A Novel…

"A hilarious and touching take on what it means to be a grown-up, Get Lucky asks the quintessential question of whether we can ever go home again. You can't help but root for Sarah right until the end, and will no doubt laugh and cry with her along the way.  A must-read."- Julie Buxbaum, author of The Opposite of Love and After You