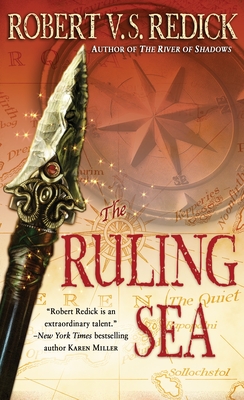 The plans of the dark sorcerer Arunis have been thwarted—for now. But the battle for control of the gargantuan ship Chathrand, on which hinges the fate of empires, is far from over. A small band of allies on board, bound together less by trust than by need, must scramble to fight an imperial conspiracy, while the sword-wielding Lady Thasha Isiq and the deckhand Pazel Pathkendle find themselves unwillingly drawn in to Arunis’s shadow games by unexpected secrets. Worst of all, in the belly of the Chathrand there lurks a festering horror, the product of a malevolent power determined to tear down the pillars of the world. Now, as the Chathrand sets course through the vast Ruling Sea—so large it has never been crossed in living memory—the fragile bonds of trust and love between the unlikely allies will be tested to the breaking point as they face unspeakable terrors, unimaginable wonders, and shattering betrayals that dwarf everything that has come before.

Don’t miss the sneak peek at Robert V. S. Redick’s new novel, The River of Shadows, in the back of the book.

“Exciting . . . enough plot twists and double-crosses to satisfy the most demanding lovers of suspense . . . Vivid characterizations and Redick’s brilliant depiction of the microcosmic world aboard the Chathrand will captivate readers.”—Publishers Weekly

Robert V. S. Redick is the author of The Red Wolf Conspiracy and The River of Shadows. His unpublished first novel, Conquistadors, was a finalist for the AWP/Thomas Dunne Novel Award, and his essay “Uncrossed River” won the New Millennium Writings Award for nonfiction. A former theater critic and international development researcher, he worked most recently for the antipoverty organization Oxfam. He lives in western Massachusetts.
Loading...
or
Not Currently Available for Direct Purchase