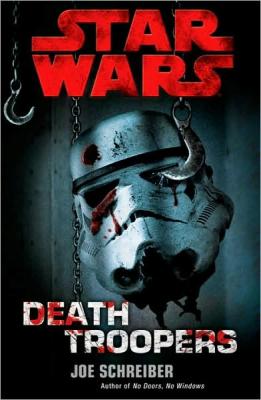 When the Imperial prison barge Purge–temporary home to five hundred of the galaxy’s most ruthless killers, rebels, scoundrels, and thieves–breaks down in a distant, uninhabited part of space, its only hope appears to lie with a Star Destroyer found drifting, derelict, and seemingly abandoned. But when a boarding party from the Purge is sent to scavenge for parts, only half of them come back–bringing with them a horrific disease so lethal that within hours nearly all aboard the Purge die in ways too hideous to imagine.

And death is only the beginning.

The Purge’s half-dozen survivors–two teenage brothers, a sadistic captain of the guards, a couple of rogue smugglers, and the chief medical officer, the lone woman on board–will do whatever it takes to stay alive. But nothing can prepare them for what lies waiting aboard the Star Destroyer amid its vast creaking emptiness that isn’t really empty at all. For the dead are rising: soulless, unstoppable, and unspeakably hungry.

“This is the Star Wars of every horror fan’s dreams—gory, funny, and brimming with a blood-spattered cast of swashbucklers and space-zombies.”—Seth Grahame-Smith, author of Pride and Prejudice and Zombies

“Brilliant . . . This book combines two of my favorite things on earth: the Star Wars universe and the undead.”—Tommy Wirkola, director of Dead Snow

Joe Schreiber is the author of Chasing the Dead, Eat the Dark, and No Doors, No Windows. He was born in Michigan but spent his formative years in Alaska, Wyoming, and Northern California. He lives in central Pennsylvania with his wife, two young children, and several original Star Wars action figures.
Loading...
or
Not Currently Available for Direct Purchase