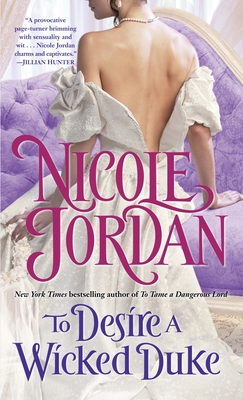 To Desire a Wicked Duke (The Courtship Wars #6)

Two years after losing her beloved fiancé to war, Tess Blanchard feels ready to chance love again. Thus she’s aghast when a threatening scandal forces her to wed her longtime nemesis, Ian Sutherland, Duke of Rotham. The impossibly arrogant, irresistibly seductive nobleman is the last man Tess could ever imagine loving. Making matters worse, she discovers secrets in Rotham’s wicked past that send her fleeing London for his remote castle in Cornwall.

Having long desired Tess, Ian is exasperated that the ton thinks he’s driven his reluctant new bride from their marriage bed and follows hard on her heels. Naturally, their spirited rivalry leads to glorious, pleasure-filled nights—complicated by a mysterious ghost who haunts Ian’s castle and Tess’s vexing insistence that he play matchmaker to her friends. But can blazing desire between two warring hearts turn into wedded bliss and timeless love?

Praise For To Desire a Wicked Duke (The Courtship Wars #6)…

Nicole Jordan is the New York Times bestselling author of numerous historical romances. She lives with her real-life hero (her husband) in the Rocky Mountains of Utah, where she is at work on her next enthralling tale about the sparks that fly when Regency lovers play the matrimonial mating game.
Loading...
or
Not Currently Available for Direct Purchase