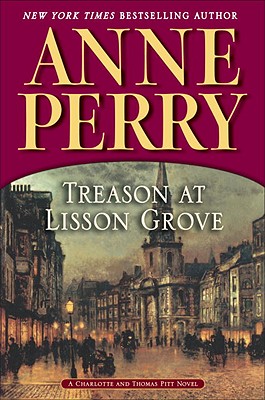 Anne Perry’s very special world of mystery, passion, and danger has attracted an entire generation of readers to her bestselling Victorian novels. Treason at Lisson Grove, her first Thomas and Charlotte Pitt novel in three years, is a masterpiece, inspired by history and spinning on a razor’s edge of tension, with a cast of characters as rich as the universe Perry evokes.

The man who lies bleeding to death in a London brickyard is no ordinary drifter but a secret informant prepared to divulge details of a potentially devastating international plot against the British government. Special Branch officer Thomas Pitt, hastening to rendezvous with him, arrives a second too late, preceded by a knife-wielding assassin. As the mortally wounded man’s life slips away, so too does the information Pitt desperately needs. The killer in turn flees on an erratic course that leads Pitt in wild pursuit, from London’s cobblestone streets to picturesque St. Malo on the French coast.

Meanwhile, Pitt’s supervisor, the formidable Victor Narraway, finds himself accused of embezzling government funds. With Pitt incommunicado in France, Narraway turns to Pitt’s clever wife, Charlotte, for help. The man who badmouthed Narraway and ruined his career with innuendo can be found in Ireland—so Charlotte agrees to pose as Narraway’s sister and accompany him to Dublin to investigate.

But unknown to Pitt and Narraway, a shadowy plotter is setting a trap that, once sprung, could destroy not just reputations but the British empire itself.

Praise For Treason at Lisson Grove: A Charlotte and Thomas Pitt Novel…

“An intricate plot about a murder at the palace [with] an irresistibly appealing Upstairs, Downstairs perspective . . . a fine introduction to Perry’s alluring world of Victorian crime and intrigue.”—The New York Times Book Review


“Another winner . . . a wonderful cast of characters with many twisting plots.”—Vero Beach Press Journal

“Anne Perry has once again delivered the tasty concoction her readers have come to expect [and] presents us with moral and political puzzles that are all too close to our own.”—Los Angeles Times Book Review


“An altogether intriguing and enjoyable mystery . . . Fans of this series, with its amazingly well-drawn historical details, know the delight of time traveling back to Victorian England.”—Bookreporter.com

“Terrific, vivid stuff . . . The alarmingly prolific Anne Perry [is] a master of the genre.”—The Seattle Times

“Perry’s as good as it gets. . . . The final courtroom scene produces more victims and left me breathless.”—The Providence Journal

Anne Perry is the bestselling author of two acclaimed series set in Victorian England: the Charlotte and Thomas Pitt novels, including "Buckingham Palace Gardens "and "Long Spoon Lane, " and the William Monk novels, including "Execution Dock" and "Dark Assassin." She is also the author of the World War I novels "No Graves As Yet, Shoulder the Sky, Angels in the Gloom, At Some Disputed Barricade, " and "We Shall Not Sleep, " as well as seven holiday novels, most recently "A Christmas Odyssey, " and a historical novel, "The Sheen on the Silk, " set in the Ottoman Empire. Anne Perry lives in Scotland.
or
Not Currently Available for Direct Purchase