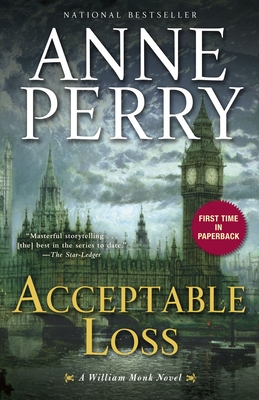 Anne Perry’s seventeenth William Monk novel, now in paperback, is a mesmerizing masterpiece of innocence and evil on London’s docks, a welcome addition to this successful and beloved series.

On a London riverbank, when the body of small-time crook Mickey Parfitt washes up with the tide, no one grieves. But William Monk, commander of the River Police, is puzzled by the murder weapon: an elegant scarf whose original owner was obviously a man of substance. Dockside informers lead Monk to a floating palace of corruption on the Thames managed by Parfitt, where a band of half-starved boys is held captive for men willing to pay a high price for midnight pleasures. Though Monk and his fearless wife, Hester, would gladly reward Parfitt’s killer, duty leads them in another direction—to an unresolved crime, to a deadly confrontation with some of the empire’s most respected men, and ultimately to a courtroom showdown with Monk’s old friend, Oliver Rathbone, in a trial of nearly unbearable tension and suspense.

“Masterful storytelling . . . [the] best in the series to date.”—The Star-Ledger

“[An Anne Perry novel can] take us away to the far reaches of our imaginations, to a place and a time about which we can only dream. . . . We see the gaslight, we feel the fog, and in Perry’s latest, Acceptable Loss, we experience the horror of murder, blackmail and sordid crime, as well as the shining victory of heroic sacrifice and personal courage.”—Asbury Park Press

“The real drama in the story involves the struggle between loyalty and truth. Questions of morality and painful choices haunt every chapter.”—Lincoln Journal Star

“Terrific . . . Readers will not be prepared for the twists and turns that lay in wait.”—Bookreporter

Anne Perry is the bestselling author of two acclaimed series set in Victorian England: the William Monk novels, including Blind Justice and A Sunless Sea, the Charlotte and Thomas Pitt novels, including Death on Blackheath and Midnight at Marble Arch. She is also the author of a series of five World War I novels, as well as eleven holiday novels, most recently A New York Christmas, and a historical novel, The Sheen on the Silk, set in the Ottoman Empire. Anne Perry lives in Scotland and Los Angeles.
Loading...
or support indie stores by buying on