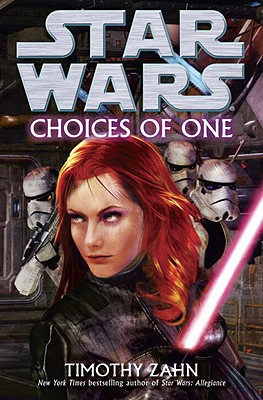 Choices of One (Hardcover)

From #1 New York Times bestselling author Timothy Zahn comes a brand-new Star Wars adventure, set in the time between A New Hope and The Empire Strikes Back and featuring the young Luke Skywalker, Han Solo, Princess Leia Organa, and the beloved Mara Jade.
The fate of the Rebellion rests on Luke Skywalker's next move.
But have the rebels entered a safe harbor or a death trap?
Eight months after the Battle of Yavin, the Rebellion is in desperate need of a new base. So when Governor Ferrouz of Candoras Sector proposes an alliance, offering the Rebels sanctuary in return for protection against the alien warlord Nuso Esva, Luke, Leia, Han, and Chewie are sent to evaluate the deal.
Mara Jade, the Emperor's Hand, is also heading for Candoras, along with the five renegade stormtroopers known as the Hand of Judgment. Their mission: to punish Ferrouz's treason and smash the Rebels for good.
But in this treacherous game of betrayals within betrayals, a wild card is waiting to be played.
Don t miss the new novella by Timothy Zahn, Crisis of Faith, featured in the 20th anniversary edition of Star Wars: Heir to the Empire

Since 1978 Timothy Zahn has written nearly seventy short stories and novelettes, numerous novels, and three short fiction collections, and won the Hugo Award for best novella. Zahn is best known for his Star Wars novels: Heir to the Empire, Dark Force Rising, The Last Command, Specter of the Past, Vision of the Future, Survivor s Quest, Outbound Flight, and Allegiance, and has more than four million copies of his books in print. His most recent publications have been the science fiction Cobra series and the six-part young-adult series Dragonback. Zahn has a B.S. in physics from Michigan State University, and an M.S. in physics from the University of Illinois. He lives with his family on the Oregon coast."
or
Not Currently Available for Direct Purchase
Copyright © 2020 American Booksellers Association