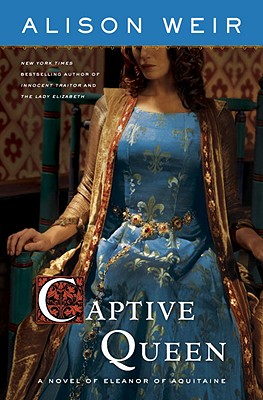 A Novel of Eleanor of Aquitaine

Having proven herself a gifted and engaging novelist with her portrayals of Queen Elizabeth I in The Lady Elizabeth and Lady Jane Grey in Innocent Traitor, New York Times bestselling author Alison Weir now harks back to the twelfth century with a sensuous and tempestuous tale that brings vividly to life England’s most passionate—and destructive—royal couple: Eleanor of Aquitaine and King Henry II.


Nearing her thirtieth birthday, Eleanor has spent the past dozen frustrating years as consort to the pious King Louis VII of France. For all its political advantages, the marriage has brought Eleanor only increasing unhappiness—and daughters instead of the hoped-for male heir. But when the young and dynamic Henry of Anjou arrives at the French court, Eleanor sees a way out of her discontent. For even as their eyes meet for the first time, the seductive Eleanor and the virile Henry know that theirs is a passion that could ignite the world.

Returning to her duchy of Aquitaine after the annulment of her marriage to Louis, Eleanor immediately sends for Henry, the future King of England, to come and marry her. The union of this royal couple will create a vast empire that stretches from the Scottish border to the Pyrenees, and marks the beginning of the celebrated Plantagenet dynasty.

But Henry and Eleanor’s marriage, charged with physical heat, begins a fiery downward spiral marred by power struggles, betrayals, bitter rivalries, and a devil’s brood of young Plantagenets—including Richard the Lionheart and the future King John. Early on, Eleanor must endure Henry’s formidable mother, the Empress Matilda, as well as his infidelities, while in later years, Henry’s friendship with Thomas Becket will lead to a deadly rivalry. Eventually, as the couple’s rebellious sons grow impatient for power, the scene is set for a vicious and tragic conflict that will engulf both Eleanor and Henry.

Vivid in detail, epic in scope, Captive Queen is an astounding and brilliantly wrought historical novel that encompasses the building of an empire and the monumental story of a royal marriage.


Praise For Captive Queen: A Novel of Eleanor of Aquitaine…

“Should be savored . . . Weir wastes no time captivating her audience.”—Seattle Post-Intelligencer

“Stunning . . . As always, [Alison] Weir renders the bona fide plot twists of her heroine’s life with all the mastery of a thriller author, marrying historical fact with licentious fiction.”—The Star Tribune

“The history itself is inherently dramatic, augmented here by Weir’s usual lush detail, which stimulates.” —Booklist

Alison Weir is the "New York Times" bestselling author of the novels Innocent Traitor and The Lady Elizabeth and several historical biographies, including Mistress of the Monarchy, Queen Isabella, Henry VIII, Eleanor of Aquitaine, The Life of Elizabeth I, and The Six Wives of Henry VIII. She lives in Surrey, England with her husband and two children.
Loading...
or
Not Currently Available for Direct Purchase