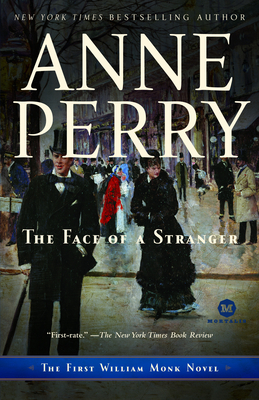 The Face of a Stranger

In this exhilarating series debut, police detective William Monk must solve the mystery of his own past.

His name, they tell him, is William Monk, and he is a London police detective. But the accident that felled him has left him with only half a life; his memory and his entire past have vanished. As he tries to hide the truth, Monk returns to work and is assigned to investigate the brutal murder of a Crimean War hero and man about town. Which makes Monk's efforts doubly difficult, since he's forgotten his professional skills along with everything else.

“Richly textured with the sights and sounds of London and its countryside . . . Solidly absorbing and Perry's best to date.”—Kirkus Reviews

Anne Perry is the bestselling author of two acclaimed series set in Victorian England: the William Monk novels, including Blind Justice and A Sunless Sea, the Charlotte and Thomas Pitt novels, including Death on Blackheath and Midnight at Marble Arch. She is also the author of a series of five World War I novels, as well as eleven holiday novels, most recently A New York Christmas, and a historical novel, The Sheen on the Silk, set in the Ottoman Empire. Anne Perry lives in Scotland and Los Angeles.
Loading...
or support indie stores by buying on