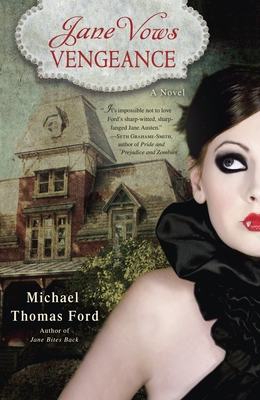 How will Jane Austen break the news to her fiancé that she’s not only undead, but also a two-hundred-plus-year-old literary icon?

In sleepy upstate New York, Jane’s wedding preparations have taken on a bloodsucking intensity. So when Walter suggests they ditch it all and combine their marriage and honeymoon with a house tour of Europe, Jane jumps at the chance to flee Lord Byron and the lingering threat of Charlotte Brontë. But to Jane’s chagrin, more than one secret from her past is about to resurface.

From an Agatha Christie–style murder mystery to a wedding interrupted by the ghosts of the Princes in the Tower to a shocking revelation about Walter’s mother, nothing about this trip is less than pure mayhem. And when a chance encounter puts Jane on the trail of a legendary device reputed to restore a vampire’s human soul, will our beloved heroine finally be able to vow her love and devotion—or will a vampire hunter’s vengeance drive a stake through her eternal life?

"If you want to read a series about vampires that will keep you giggling while you read, then you have got to check out this series." --Sookie Stackhouse Books

"Ford’s final book in the trilogy is nicely connected with characters and ideas to the previous books, but it can also be read as a stand-alone...The key elements of a charmingly reluctant vampire, supportive friends, and flashes of brilliance offset by poor undead life-skills remain in full force."--Library Journal

"This fun and frothy series will appeal to fans of Jasper Fforde’s literary mashups (The Eyre Affair, 2002) as well as Austen fans who like a dose of vampires (Steven Hockensmith's Dawn of the Dreadfuls, 2010)." --Booklist

"This fang-in-cheek book with its quirky sense of humor and enjoyable characters is a pleasing addition to the paranormal world. Ford's writing is a real treat." --Parkersburg News & Sentinel

"[A] fun, humorous, and enjoyable trilogy . . .Trust me when I say how fun these books are." --Reads From the Field

Michael Thomas Ford is the author of Jane Bites Back and Jane Goes Batty, as well as numerous other books, including the novels Z, The Road Home, What We Remember, Suicide Notes, Changing Tides, Full Circle, Looking for It, and Last Summer.
Loading...
or
Not Currently Available for Direct Purchase