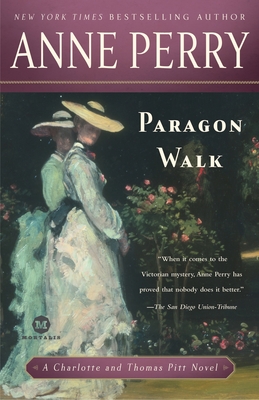 In the posh London street of Paragon Walk, an unspeakable crime is committed: A young woman is brutally raped and murdered.

Once again, that incomparable team of sleuths Inspector Thomas Pitt and his young wife, Charlotte, set themselves against a vicious murderer. As the elegant masks of the wellborn suspects slip, it becomes appallingly clear that something ugly lurks behind the handsome façades of Paragon Walk–something that may lead to more scandal, and more murder.

Praise For Paragon Walk: A Charlotte and Thomas Pitt Novel…

“When it comes to the Victorian mystery, Anne Perry has proved that nobody does it better.”—San Diego Union-Tribune

“Perry combines murder with a profile of the morals and manners of Victorian society. . . . Murder fans who prefer their crimes with a touch of class should heat some scones and nestle back for the afternoon.”–Atlanta Journal & Constitution

“Perry has the gift of making [the Victorian era] all seem immediate and very much alive.”—Philadelphia Inquirer
or
Buy Here
Copyright © 2020 American Booksellers Association