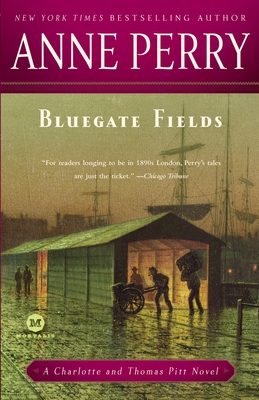 Inspector Thomas Pitt is shocked. The body of a boy, clearly from the upper classes, has been found in the filthy sewers of Bluegate Fields, one of London’s most dangerous slums. What’s more, the unfortunate boy had been violated before he was murdered. So vile a case is hardly a topic for drawing-room conversation.

But when the Waybournes, the boy’s family, refuse to answer the police’s questions, Inspector Pitt begins to wonder what secrets they are trying to hide. Pitt’s wife and helpmeet, Charlotte, is determined to find out–even if it means tearing down the façades of an oh-so-proper family.

Praise For Bluegate Fields: A Charlotte and Thomas Pitt Novel…

“Perry is a forceful plotter and a consistently polished writer.”—Seattle Weekly

“Perry is [a] master of crime fiction.”—Baltimore Sun


“When it comes to the Victorian mystery, Anne Perry has proved that nobody does it better.”—San Diego Union-Tribune

“Murder fans who prefer their crimes with a touch of class should heat some scones and nestle back for the afternoon.”—Atlanta Journal-Constitution