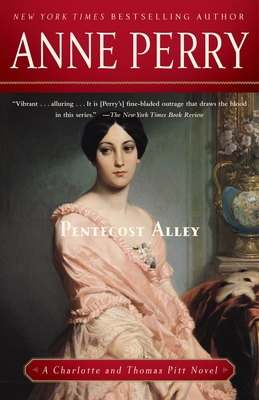 The murder of a prostitute named Ada McKinley in a bedroom on decrepit Pentecost Alley should occasion no stir in Victoria’s great metropolis, but under the victim’s body, the police find a Hellfire Club badge inscribed with the name “Finlay Fitzjames”—a name that instantly draws Superintendent Thomas Pitt into the case. Finlay’s father—immensely wealthy, powerful, and dangerous—refuses to consider the possibility that his son has been in Ada McKinley’s bed. The implication is clear: Pitt is to arrest someone other than Finlay Fitzjames for Ada’s demise. But Thomas Pitt is not a man to be intimidated, and with the help of his quick-witted wife, Charlotte, he stubbornly pursues his investigation—one that twists and turns like London’s own ancient streets.

Praise For Pentecost Alley: A Charlotte and Thomas Pitt Novel…

“Vibrant . . alluring . . . It is [Perry’s] fine-bladed outrage that draws the blood in this series.”—The New York Times Book Review

“Difficult to put down . . . tricky and beautifully paced.”—The Virginian-Pilot

“Stands as one of her most intricately constructed plots . . . Perry packs a triple wallop into the final pages, one climax following another.”—Chicago Sun-Times

“Unfolds in a masterly fashion, sure to satisfy devotees of the classic puzzle.”—Houston Chronicle

“Beautifully crafted, filled with the gaslit atmosphere of a bygone world.”—Cosmopolitan
or support indie stores by buying on
Copyright © 2020 American Booksellers Association