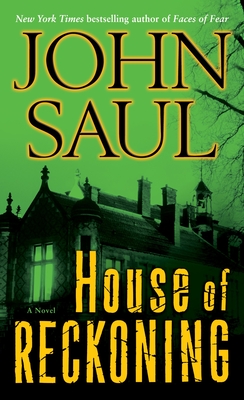 After the untimely death of her mother and the arrest of her father for killing a man in barroom brawl, fourteen-year-old Sarah Crane is forced to grow up fast. Left in the cold care of a foster family and alienated at school, Sarah befriends classmate Nick Dunnigan, a former mental patient still plagued by voices and visions, and the eccentric art instructor Bettina Phillips, a mentor eager to nurture Sarah’s talent for painting. But within the walls of Bettina’s ancestral mansion, Sarah finds that monstrous images from the house’s dark history seem to flow unbidden from her paintbrush—images echoed by Nick’s chilling hallucinations. It seems the violence and fury of long-dead generations have finally found a gateway from the grave into the world of the living. And Sarah and Nick have found a power they never had: to take control, and take revenge.

House of Reckoning is John Saul’s thirty-sixth novel. His first novel, Suffer the Children, published in 1977, was an immediate million-copy bestseller. His other bestselling suspense novels include Faces of Fear, The Devil’s Labyrinth, In the Dark of the Night, Perfect Nightmare, Black Creek Crossing, Midnight Voices, The Manhattan Hunt Club, Nightshade, The Right Hand of Evil, The Presence, Black Lightning, The Homing, and Guardian. He is also the author of the New York Times bestselling serial thriller The Blackstone Chronicles, initially published in six installments and now available in one complete volume. Saul divides his time between Seattle, Washington, and Hawaii.

Praise For House of Reckoning: A Novel…

“The storytelling is . . . undeniably powerful as it brings to vivid life an adolescent’s zero-sum view of moral realities.”—Kirkus Reviews

“Scary . . . It is the house that is the real star of the story.”—Lincoln Journal Star

“John Saul has the instincts of a natural storyteller.”—People
or
Not Currently Available for Direct Purchase
Copyright © 2020 American Booksellers Association