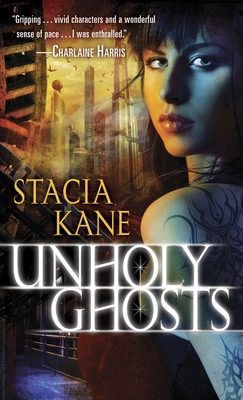 THE DEPARTED HAVE ARRIVED.

The world is not the way it was. The dead have risen, and the living are under attack. The powerful Church of Real Truth, in charge since the government fell, has sworn to reimburse citizens being harassed by the deceased. Enter Chess Putnam, a fully tattooed witch and freewheeling ghost hunter. She’s got a real talent for banishing the wicked dead. But Chess is keeping a dark secret: She owes a lot of money to a murderous drug lord named Bump, who wants immediate payback in the form of a dangerous job that involves black magic, human sacrifice, a nefarious demonic creature, and enough wicked energy to wipe out a city of souls. Toss in lust for a rival gang leader and a dangerous attraction to Bump’s ruthless enforcer, and Chess begins to wonder if the rush is really worth it. Hell, yeah.


“The ultimate bible of badassery . . . a black diamond of an urban fantasy.”
—Ann Aguirre, national bestselling author of Blue Diablo and Doubleblind

“Gripping . . . vivid characters and a wonderful sense of pace . . . I was enthralled.”—Charlaine Harris

Stacia Kane has been a phone psychic, a customer service representative, a bartender, and a movie theater usher, and she thinks that writing is more fun than all of them combined. She wears a lot of black, still makes great cocktails, likes to play music loud in the car, and thinks Die Hard is one of the greatest movies ever made. She believes in dragons and the divine right of kings, and is a fervent Ricardian. She lives outside Atlanta with her husband and their two little girls.
Loading...
or
Not Currently Available for Direct Purchase